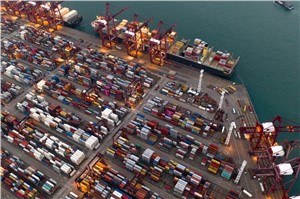 More and more electric vehicles (EVs) are accelerating onto roads worldwide, and as they gain traction, they’re becoming one of California’s biggest economic exports. Last year, EVs were the state’s 8th most valuable export, worth almost $3 billion in revenue—more than phones, pistachios, and even oil.

In 2019, California’s EV exports are poised to grow further – expected to hit $3.4 billion, which would have made it the state’s fifth most valuable export in 2018.

California’s industrial and manufacturing sectors are often underestimated, but electrified transportation has become a significant economic engine, creating a booming export industry and high-quality jobs in a growing global market. Data from the National Association of Manufacturers show the industry was the 6th largest source of job growth in California’s manufacturing sector in 2018.

Tesla, the only automaker mass-producing light-duty passenger EVs in California today, is currently driving this trend. And while federal rules pushed Tesla to prioritize U.S. sales in 2018, that policy dynamic is fading in 2019, leading to the expectation foreign markets will compose a larger share of sales this year.

Because all of Tesla’s vehicle production currently occurs at its Fremont factory, the more EVs that Tesla builds, the higher the EV industry’s export revenue rises for California. Deliveries and exports grew at nearly identical rates through 2017 at 4.6 times and 4.7 times, respectively, benchmarked to 2013 levels. The connection between Tesla’s growing production and California’s recent mini-boom in EV exports is clear when the data are graphed side by side.

While the overall positive relationship is obvious, 2018 broke with the overall trend. That year, California’s exports held steady while Tesla’s production doubled. Federal policy was a key reason for the deviation – the $7,500 federal tax credit for EV buyers ramps down after an automaker reaches 200,000 cumulative plug-in electric sales, which Tesla did last year.

So, 2018 was the last year Tesla’s U.S. customers were able to benefit from the full federal tax credit, and the company’s federal tax credit has since dropped to $1,875. Though it will drop again to zero in 2020, the year-over-year difference is much lower. The domestic bias induced by federal policy has passed its peak, and moving forward, Tesla will almost certainly be shipping more vehicles to Europe and Asia. That development, coupled with the automaker’s recent robust production and delivery numbers, which are anchored by its top-selling Model 3, makes it almost certain California’s EV export numbers will jump in 2019.

But while Tesla is big, it’s not the only game in California. Electric bus makers BYD and Proterra are based in the state, and auto-focused technology startups—focused on a new era of electrification, ride-sharing, and autonomous driving—have proliferated in Silicon Valley. Meanwhile, Karma Automotive has launched the $100 million Karma Innovation and Customization Center in Moreno Valley to be the production center for its Revero model.

Demand for all-electric cars keeps growing. In California, their market share went from 4.7% in 2018 to 5.6% year to date, and Tesla has been working to increase production and deliveries further to meet a backlog of orders. Global EV sales are also rising, more than doubling between 2016 and 2018, and the International Energy Agency (IEA) projects the global battery EV passenger car fleet will rise from 10 million in 2020 to 145 million in 2030 with strong market growth in Europe, India, Japan, and multiple other countries.

This kind of growth is driven by strong decarbonization policies. California’s climate policy leadership was an essential element of this economic success story. The state’s zero-emission vehicle (ZEV) policy sets minimum EV sales performance requirements for all the major automakers, and several other states have followed suit by adopting California’s ZEV policy. Unfortunately, this policy is under threat in the wake of the Trump administration’s unprecedented effort to revoke it along with California’s ability to set stringent tailpipe emissions standards.

Despite this resistance emanating from Washington D.C., policymakers in other state capitols are seeing the wisdom, making smart policy another export of sorts from California. Nine other states representing about 28% of America’s national auto market have followed the state’s lead, adopting California’s ZEV policy as is their right under federal law.

China has also adopted a ZEV sales requirement modeled on California’s policy. China is leading the global EV market with more than 1 million in annual sales, and Tesla has benefited from that momentum: The automaker’s sales there are up 40% in the first half of 2019 compared to last year.

California is building a hub of EV expertise that creates long-term economic benefits. By fostering EV production and promoting sales, it’s creating good manufacturing jobs and keeping the state—as well as the nation—competitive in the global drive toward cleaner transportation.