Uber, Lyft Have To Transition To Electric Vehicles In Califo

Uber, Lyft Have To Transition To Electric Vehicles In California 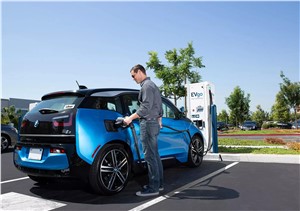 California’s long-running fight to curb exhaust and carbon pollution from cars and trucks is taking a new turn as the state just approved the first rule in the U.S. requiring rideshare operators such as Uber and Lyft to transition from gasoline to electric vehicles in their networks by the end of the decade.

The California Air Resources Board unanimously approved the Clean Mile Standard in Sacramento on Thursday, which phases in the new rule starting in 2023. In the initial year, just 2% of vehicle miles traveled in rideshare fleets in the state need to be in electric vehicles, but the requirement jumps to 50% by 2027 and 90% by 2030. The new rule, which will to be enforced by the California Public Utilities Commission that regulates rideshare companies, will also try to ensure that the cost of electric vehicles for drivers, access to charging stations and the cost of charging is eased for drivers, particularly those with lower incomes.

“This move is yet another piece of the comprehensive program California has developed to protect public health from harmful emissions,” said CARB Chair Liane Randolph. “The transportation sector is responsible for nearly half of California’s greenhouse gas emissions, the vast majority of which come from light-duty vehicles. This action will help provide certainty to the state’s climate efforts and improve air quality in our most disadvantaged communities.”

The move by California regulators aligns with the state’s plan to ban sales of new gasoline cars by 2035 and an effort by California legislators to target rideshare fleets for dramatic reductions in emissions. Uber and Lyft have made efforts to get more electric and plug-in hybrid vehicles into their networks in recent years, with Uber committing up to $800 million to help its drivers shift to electric vehicles. The company also has a target of converting all its rides to electric power by 2040. Lyft has an even more aggressive target, saying it’s pushing to convert all its rides to electric vehicles by 2030, aligning with California’s new rule.

The move also comes as President Joe Biden encourages automakers to rapidly accelerate production and sales of battery-powered cars and trucks to help fight climate change. To do that, the Biden Administration is calling for $174 billion of incentives for both customers and manufacturers as part of a massive infrastructure bill.

“Uber shares California's climate and EV goals and applauds the Clean Miles Standard as one of the first emissions policies in the world based on real-world vehicle use,” said Adam Gromis, Uber’s global head of sustainability. “With ridehail trips accounting for just 1% of California’s light-duty vehicle emissions, we hope CMS becomes a useful template for examining the other 99%.”

Lyft didn’t immediately respond to a request for comment.

In addition getting more EVs in their networks, rideshare companies can also get credits to meet state greenhouse gas targets if they invest in “sidewalk and bike lane infrastructure that supports active transportation and connecting to transit through integrated trip booking apps,” the Air Resources Board said in a statement.

California has incentives in place to encourage purchases of so-called zero-emission vehicles, including a rebate of up to $1,500, and a separate state program offering rebates of up to $7,000 for EV buyers with lower incomes. There’s also a program to encourage scrapping on inefficient, high-polluting older vehicles that offers up to $9,500 to encourage low-income drivers to switch into something cleaner.

“This regulation is a big win for public health, the climate and for ride-hailing drivers too if Uber and Lyft step up and support electrifying their fleets,” said Elizabeth Irvin, senior transportation analyst for the Union of Concerned Scientists. “Ride-hailing services in urban areas have increased pollution and congestion and reduced climate-friendly, public-transit ridership. California air regulators took a critical step today to ensure that these companies take responsibility for their pollution by transitioning to electric vehicles.”

California’s Air Resources Board, which has had the authority to set pollution rules exceeding those of the federal government for decades owing to the state’s persistent air pollution problems, said the new regulations can ensure that Uber and Lyft meet the goals they’ve already announced. While the regulation approved on Thursday applies only to California, more than a dozen additional states follow its automotive emissions rules, indicating that others may follow its lead on rideshare companies.

Tell a friend:
Uber, Lyft Have To Transition To Electric Vehicles In California