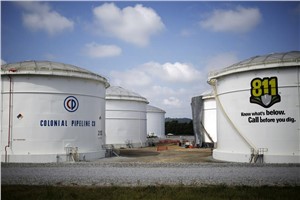 One of America’s energy jugulars, the 5,500-mile, 100 million gallon-per day Colonial pipeline network, was shut down Friday night because of what the company refers to as a “cybersecurity attack.”

The incident is ongoing, the company says, and is already under investigation by private cyber forces and federal agencies.

The alleged attack disrupts the nation’s largest gasoline and diesel fuel pipeline system, which supplies 45% of fuel supplies to the East Coast, including New York harbor and airports.

“We proactively took certain systems offline to contain the threat, which has temporarily halted all pipeline operations,” said the company.

Regardless of how quickly Colonial gets operations restored, “this pipeline shutdown sends the message that core elements of our national infrastructure continue to be vulnerable to cyberattack,” says Mike Chapple, a computer scientist and professor at the University of Notre Dame’s Mendoza College of Business. Even if the shut downs were made out of some abundance of caution, "that this attack compromised systems that control pipeline infrastructure indicates either the attack was extremely sophisticated or the systems were not well secured.”

Colonial Pipeline is owned by institutional investors including KKR KKR +1.8%, Koch Capital Investments and Shell Midstream. In years past Forbes has reported that the Koch family made more than $85 million a year off the pipeline.

The attack comes in the wake of the Solarwinds SWI +0.8% hack by Russia as well as the earlier Russian hack of U.S. electric power companies.

Earlier this year in Oldsmar, Florida hackers sought to take control of the municipal water system. When detected they were in the process of boosting levels of dangerous chemicals in the water supply of 15,000 homes on Florida’s west coast.

And going back to 2010, perhaps the granddaddy of the industrial cyberattacks we know about — when Iran’s nuclear centerfuge operation was targetted by a computer worm program called Stuxnet believed to have been deployed by Israel and the U.S.