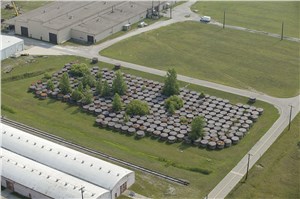 FBP is responsible for decontamination and decommissioning (D&D) of the Portsmouth Gaseous Diffusion Plant (GDP). The scope of the project includes deactivation and preparation for demolition and disposal of all GDP facilities, process equipment, related process buildings and other ancillary facilities. It also includes continued environmental remediation, uranium stewardship and community outreach programs.

“BWXT and Fluor are performing very important work at Portsmouth, and we are exceedingly pleased that the Energy Department extended this contract to ensure continuity of the effort,” said Rex Geveden, BWXT’s president and chief executive officer. “We remain squarely focused on safe and efficient project execution as we work to steadily reduce the environmental liabilities at the site.”

The Portsmouth GDP operated from 1954 to 2001. Located in Pike County, Ohio, the plant occupies about 1,200 acres. The plant was one of three large gaseous diffusion plants in the U.S. initially constructed to produce enriched uranium to support the nation’s nuclear weapons program and, in later years, enriched uranium used by commercial nuclear reactors. The Department of Energy began its environmental cleanup program at the site in 1989, and the effort continues today in cooperation with the U.S. and Ohio Environmental Protection Agencies.