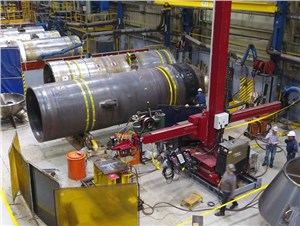 The original contract for Bruce Power’s Unit 6 steam generators, previously announced in July 2016 and amended in August 2017, has been amended to include an additional 24 steam generators (including steam drums) for Bruce Units 5, 7 and 8.

This steam generator contract represents the largest contract ever to be awarded to BWXT Canada and will secure many jobs in both engineering and skilled labour in Cambridge through 2030.

Commencing in 2020, MCR is part of Bruce Power’s Life-Extension Program, which will allow the eight-unit site to operate to 2064, and provide over 30 percent of Ontario’s electricity for decades. Work related to this contract will commence immediately with deliveries occurring through 2030.

“The steam generator contract allows us to secure very long-term work for our Cambridge, Ontario facility, which sustains jobs for many of our highly skilled and talented employees for many years to come,” said President of BWXT Canada, John MacQuarrie. “The life extension of Bruce Power’s nuclear reactors is vital to the supply of clean, low-cost and reliable power for Ontarians, and we are so proud to be part of this project.”

“This ‘Made in Ontario’ agreement is good news for employees of BWXT, as well as the economy of the greater Cambridge area,” said Mike Rencheck, Bruce Power’s President and CEO. “Bruce Power’s supply chain acquires 90 percent of its goods and services right in Ontario, investing $4 billion into the province’s economy annually, while creating and sustaining 22,000 jobs directly and indirectly every year, including here in the Cambridge area.”

Bryan May, Member of Parliament for Cambridge, said, “The award of this contract by Bruce Power is a tremendous win for the City of Cambridge and means jobs in Waterloo Region. I am proud to see BWXT Canada playing a major role in ensuring the success of the most significant energy infrastructure project for the Province of Ontario.”

“Today’s announcement is an indication of the incredible engineering and manufacturing talent we have right here in Cambridge,” said Member of Provincial Parliament for Cambridge, Kathryn McGarry. “I’m so pleased that BWXT will continue to support Bruce Power in their contribution to clean, low-cost and reliable power for Ontarians for many years to come.”

“This contract means a lot to both the talented people of BWXT and the City of Cambridge,” said Mayor of Cambridge, Doug Craig. “For over 170 years, BWXT has been a prominent employer in our city, and we look forward to their continued success.”