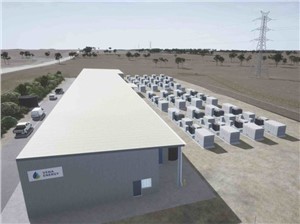 Queensland’s first big battery, at Wandoan South, has obtained its registration from the Australian Energy Market Operator and will soon be open for business – delivering grid services and time shifting wind and solar for its client, AGL Energy.

The Wandoan big battery is owned by Vena Energy, and at 100MW/150MWh is roughly the same size as the original “Teslas big battery” at Hornsdale, which has since been expanded and will soon be dwarfed by the new 300MW/450MWh Victoria Big Battery near Geelong.

It is being built by contractor Doosan in the Western Downs region, the centre for a lot of the state’s wind and solar projects, and could be co-located with a future gigawatt scale solar project.

The registration was revealed in a stakeholder memo from AEMO this week, and it will have two DUIDs, WANDBL1 for when it charges, and WANDBG1 for when it discharges into the grid.

Anil Nangia, the head of Vena Energy Australia says the battery is going through testing now and will begin operation at certain hold points in the next few weeks. It should be fully operational by October.

“It’s very exciting,” Nangia told RenewEconomy. “It’s great that we have been connected to the grid, we have worked well with (transmission company) Powerlink and hope to be operational by the end of Q3 or the start of q4.

Wandoan South started construction last year, and is being completed roughly on schedule. It could have made a big difference, as some suggest, if it had been online when the Callide coal generator exploded in May, setting off a catastrophic chain of events that resulted in widespread blackouts.

Battery experts suggested that a big battery in Queensland could have helped to cushion the blow from the dramatic events at Callide.

They noted the impact of the expanded Tesla big battery (now at 150MW/194MWh), which offered services as a “virtual synchronous machine” that helped moderate and slow the frequency excursion.

But there was a limit to what it could achieve because it was outside the grid and the transmission link was constrained.

Nangia agrees. “You could see even the Tesla battery from Hornsdale helped, and if we were there at that time, we could delivered significant support to the grid,” he said.

“It’s a good time to get into the market. It has a 200 millisecond response time and can help balance supply and demand.”

A number of other big batteries are planned for Queensland, as part of the state government’s post Callide “battery blitz” that will include a 150MW two hour battery at the Tarong coal generator, along with a proposal to build a large pumped hydro storage facility.

Wandoan South forms part of a rapidly growing portfolio of battery storage assets being put together by AGL as it focuses on renewables and dispatchable power, and prepares to close the Liddell coal generator in NSW.

AGL already contracts the relatively small (30MW/8MWh) Dalrymple North battery in South Australia, and has singed a deal with Maoneng to deliver a further 200MW/400MWh of battery storage in coming years in NSW.

It is also planning its own batteries, starting off with a 250MW battery at the site of its Torrens Island gas fleet near Adelaide, that will grow from one hour storage to four hours storage, and a 200MW big battery next to its Loy Yang A coal generator in Victoria, also with up to four hours storage.

AGL  is also planning a Big battery at the Liddell site, although the size appears to range from 150MW and one hour storate all the way up to 500MW and two hours storage, likely depending on market conditions.

Earlier this week we reported that the Victoria Big Battery had also gained its registration and is likely to begin initial operations this week.

Its main focus will be an annual summer contract to deliver grid services to AEMO that will allow the capacity of the main link between NSW and Victoria to be increased, while it will also have a significant role in the arbitrage market and delivering FCAS services.

Neoen, which owns both the Victoria and the Hornsdale big batteries, has also recently commissioned the 20MW/34MWh Bulgana big battery, located next to the Bulgana wind farm in western Victoria. All its big batteries use Tesla technology.