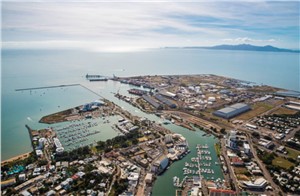 A plan to export up to 200,000 tonnes a year of Queensland-made renewable hydrogen to South Korea is being weighed as part of a memorandum of understanding between Sun Metals sister company Ark Energy and the Port of Townsville.

The MOU was announced on Tuesday by Queensland energy minister Mick de Brenni, who said that a feasibility study would investigate the development of a “transport-focused” renewable hydrogen facility at Sun Metals zinc refinery in Townsville – dubbed SunHQ – and export facilities at the city’s port.

Ark Energy, a subsidiary of Korea Zinc established to decarbonise the group’s energy supply, has cut its teeth developing the SunHQ Hydrogen Hub at the site of Sun Metals’ zinc refinery, which will be powered by the existing 124MW solar farm.

The company reiterated this week that its initial goal was to build North Queensland’s domestic hydrogen economy by supporting fleet owners to switch from diesel to hydrogen fuel cell commercial vehicles, which could be refuelled at SunHQ.

Its “ultimate goal,” however, was to export green hydrogen to customers in Asia starting with its parent company in South Korea, whose hydrogen demand could be as high as 200,000 tonnes a year.

“We believe that Townsville has the potential to become a major global hub for hydrogen exports,” said Ark Energy CEO Daniel Kim.

“The MOU with the Port of Townsville is an important step in our journey to investigate this exciting export opportunity, which has the potential to transform the regional economy of North Queensland.”

For the Port of Townsville, the MOU with Ark Energy adds to one already signed with Origin Energy to facilitate hydrogen exports to Japan.

Those plans, first flagged in October of 2020, included a huge 300MW electrolyser in Townsville and production of more than 36,000 tonnes of green hydrogen a year for the export markets.

For the Queensland government, the new MOU builds on the state’s plans to become a major player in the emerging renewable hydrogen industry – and it’s in a race, on this front, with the governments of Western Australia and South Australia.

“Now, through partnerships like this one, Queensland hydrogen will help decarbonise the world and create decent, secure jobs for regional Queenslanders. Our key strategic advantage in Queensland is our State-owned ports.”

The state’s assistant minister for hydrogen development Lance McCallum said the MOU between the publicly owned Port of Townsville and Ark Energy would help secure new and emerging jobs in North Queensland.

“The Palaszczuk government has been a leader in backing hydrogen for the future which is why we launched the $2 billion Queensland Renewable Energy and Hydrogen Jobs Fund as well as the Hydrogen Industry Development Strategy,” he said.

Ark Energy, meanwhile, has other interests in the state, as the owner of a 30% stake in one of Australia’s largest wind projects, the massive 923MW MacIntyre wind farm that is being built by Acciona in south-west Queensland.

That project, which will begin construction later this year, is 70% owned by Spain-based Acciona, which also retains the responsibility for managing the project through its development, construction, operations and maintenance stages.

A further 103MW project, called the Karara wind farm, is being built – also by Acciona – next door to the MacIntyre project by Queensland state government-owned utility, CleanCo, taking the overall capacity of the wind energy hub to a whopping 1026MW.