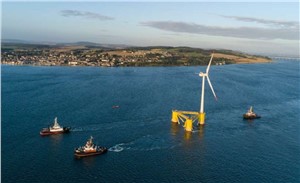 The final turbine at the 50MW Kincardine Offshore Windfarm was completed in late-August. Originally consisting of a 2MW turbine installed all the way back in 2018, a further five 9.525MW wind turbines were added this year to bring total capacity to 50MW.

It is located 15-kilometres from the shore of Aberdeen, and floats in waters between 60 to 80metres and is able to generate 200,000 MWh per year to the national grid – the equivalent power needed to power over 50,000 homes.

“This is the first floating project that Statkraft has been involved in and we expect more to follow; a key technology that could help countries around the world achieve their renewable energy targets,” said John Puddephatt, the manager long term PPA Origination at Statkraft.

“PPAs such as these play a key role in providing project owners with financial predictability and security therefore helping enable long term investment and financing.”

Statkraft has invested heavily in the United Kingdom’s renewable energy industry, with close to £1.5 billion invested to facilitate over 6GW worth of new-build renewable capacity through PPAs.

The Kincardine wind farm was developed by an offshoot of Cobra Group, and the EPC contractor was Cobra Wind International.

Scotland sources 97.4 per cent of its electricity needs from renewables, mostly wind, in 2020.