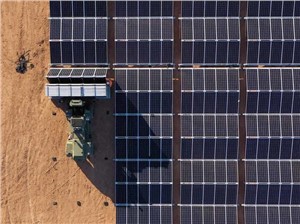 Former prime minister Malcolm Turnbull has put his money where his renewable energy mouth is, investing in innovative Australian technology solar business 5B as part of an over-subscribed pre-series B funding round.

5B said on Tuesday the new investment round had received participation from existing investors that includes the US-based energy giant AES Corporation, and the chair of Beyond Zero Emissions Eytan Lenko. T

5B said the ‘pre-series B’ investment round had raised $12 million and would be used to accelerate the development of its modular solar technologies and to expand the company into new global markets.

The modular Maverick system developed by 5B enables pre-mounted solar panels to be deployed very rapidly. The company undertook its first international project in partnership with AES Panamá, which installed 2MW of solar panels in just ten working days.

5B’ has developed an easy to deploy Maverick solar panel solution and have been earmarked to supply solar panels to the massive 10GW Sun Cable project in the Northern Territory, itself backed by tech billionaire Mike Cannon-Brookes.

5B co-founder and CEO, Chris McGrath, said the company believed it was well positioned to take advantage of a massive global transition to renewable energy.

“We are at the cusp of what will arguably be the next industrial revolution for the world, driven by ultra low-cost, massively abundant clean energy from solar PV. The only remaining question is not if, but how quickly, we will achieve this,” McGrath said.

“Continued alignment with our vision and growing confidence in our ability to uniquely contribute to this from our investors and partners is enabling 5B to keep running as hard and fast as we all need to be together to realise this future”.

Turnbull said that he believed the modular solar system developed by 5B would enable significant large scale deployment of renewables.

“5B is one of the most innovative Australian clean energy companies. Their MAVERICK technology is the keystone to unlocking the next generation of clean energy at the scale required to urgently address climate change,” Turnbull said.

Following the successful funding round, 5B said the company would be looking to target growth opportunities in overseas markets, including the United States, Chile and India.