Matt Kean Takes on Angus Taylor: "I'm Not on the Side of Vested Interests" 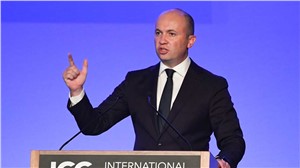 New South Wales energy minister Matt Kean has delivered a strong defence of the NSW government’s electricity strategy, rejecting criticism from federal energy minister Angus Taylor, saying that he stood with consumers rather than “vested interests” and that these should ‘get out of the way’.

In extraordinary tit-for-tat speeches at the AFR’s online Energy and Climate Summit on Monday, Kean and his federal counterpart lifted the veil of Coalition unity, as Taylor insisted on his ‘gas-led’ approach, while Kean argued that his state’s embrace of clean energy sources would ultimately leave households and businesses better off with cheaper supplies of energy.

Earlier in the day, Taylor had expressed his concern that energy policies were being developed by state governments independent of the federal government, or as some would observe, in the plan of a feral policy vacuum. In particular, Taylor said the NSW energy plans would see large-scale coal generators pushed out of the market by a combination of renewable energy and storage projects.

“I have been concerned about accountability in the energy market. We all need to be accountable to hardworking energy customers,” Taylor told the AFR summit. “That is the households, small businesses and industry who rely on affordable energy to make ends meet and in many cases for their livelihoods.

“I’m concerned about models and analysis including unrealistic assumptions that don’t translate into the real world. We shouldn’t see models that assume large coal generators stay in the market despite policy changes that seriously undermine profitability and commercial sustainability. If policymakers want to force out coal generators prematurely, they should say that upfront,” Taylor added.

Kean, whose office has masterminded the plan to support the construction of much as 12GW of new wind and solar projects and 2GW storage capacity over the next ten years, rsponded in kind.

“I’m confident that we will get this right to protect the consumers and businesses in New South Wales,” Kean said. “I’m not here to support vested interests. I’m here to support the community interest and that’s exactly what this policy does.

“I’m here to put consumers first. I’m here to look after the businesses and families of New South Wales and if the vested interests want to stand in the way, then I say to them, ‘get out of the way, let us get on with delivering cheaper, reliable energy. Let us make sure we provide the right market settings to get the private sector to invest with confidence and get that kit built.'”

Kean also said NSW had done its modelling: “We need to make sure that we’ve got the right regulatory settings and the right investment signals to make sure the private sector will deliver the infrastructure. We need to keep the lights on and drive prices down. We don’t want to see the early closure of coal fired power stations and we’ve modelled this extensively. In fact, we’ve used Aurora to do the modelling.”

Kean highlighted the fact that four of New South Wales’ five largest coal fired generators are scheduled to close within the next 15 years. The Eraring, Bayswater, Liddell and Vales Point power stations are all set to close by 2035 and will see around 9,000MW of generation capacity removed from the market.

To replace this lost capacity, the NSW government is establishing a number of Renewable Energy Zones, which will see new wind and solar projects coordinated with new transmission network capacity, allowing the coal power stations to be replaced with lower cost and lower emissions energy sources.

Kean added that by taking this approach, the NSW government would be able to avoid the kinds of market interventions being threatened by the Morrison government, which includes a threat to use the government-owned Snowy Hydro to build a new gas generator in the Hunter region.

“This is exactly why we need a roadmap because there were not the right market signals in place, because we didn’t have the right regulatory settings,” Kean added. “Liddell is about to close and the infrastructure required to keep those prices low and keep the system reliable, wasn’t built in time and that’s why minister Tyler has had to intervene directly in the market.”

“We want to avoid such distortions, we want to make sure that we provide a clear roadmap, the clear long term investments signal so that developers can invest with confidence and build the kit that we need to keep the lights on and drive prices down.”

Taylor had earlier reiterated to the AFR summit that the Morrison government would continue to support the gas sector, and that it wants to see Australia remain a leading user and exporter of fossil gas.

“The role of gas in manufacturing is far broader than is typically acknowledged. It provides direct heat, it is a chemical feedstock, and it plays a pivotal role in the price of electricity,” Taylor told the AFR Summit. “Affordable reliable gas can make a remarkable difference across all three of these areas, whilst at the same time bringing down emissions.

“To demonise gas, as many seek to do, is both irresponsible and intellectually dishonest. The Commonwealth Government is committed to Australia remaining as one of the top liquefied natural gas – LNG – exporters in the world.”

Tell a friend:
Matt Kean Takes on Angus Taylor: "I'm Not on the Side of Vested Interests"