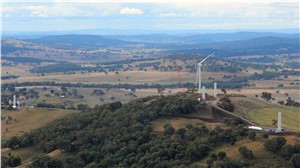 The long development journey for a 79-turbine wind farm proposed for the Southern Tablelands of New South Wales looks closer to reaching its destination, after developers Goldwind inked a deal with state-owned network owner TransGrid.

Goldwind Australia said on Monday that it had signed a commercial agreement with TransGrid for the connection and construction of  assets for Coppabella Wind Farm, which is proposed for roughly 30km west of Yass.

Tom Nielsen, the development manager for the project, said the agreement was a significant step in finalising the development of the wind farm, which has been in the works for nearly 12 years.

Back in 2016, the project – then known as the Yass Valley wind farm and owned by Epuron Australia – received its first state government planning approval, some seven years after it was first proposed and at nearly half its original size.

In 2018, having been sold to Goldwind, the project’s name was changed and it was again given the all-clear by the NSW Independent Planning Commission, with some changes to the previous approval.

“We are pleased to once again work with our long-term partner TransGrid to construct the connection assets and to operate and maintain the connection for Coppabella Wind Farm,” said Nielsen in comments this week.

Nielsen said the project was expected to employ around 150 staff during the construction phase, and up to 15 permanent ongoing maintenance employees once operational.

Coppabella Wind Farm is approved for up to 75 wind turbines that will produce approximately 900GWh per year of renewable energy to power more than 150,000 New South Wales homes.

Tell a friend:
Coppabella Wind Farm Set for Construction in NSW After Deal With Transgrid