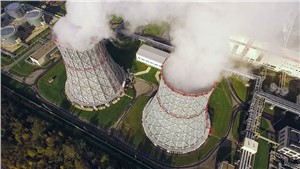 A lignite (brown coal) power station in the eastern German town of Chemnitz is going to be shut down by 2023, instead of the last unit running until 2029, the management of plant operator eins energie in sachsen has said.

Speaking at an event by the Carlowitz-Gesellschaft last week, eins energie in sachsen chairman Roland Warner said the company didn’t have an alternative but to take block C offline earlier than planned due to a “price explosion” in the European CO2 emissions trading scheme, local news website TAG24 reports.

The Chemnitz combined heat and power plant consists of three units, one of which is already closed with the other two now to follow by 2023. The site of Heizkraftwerk Nord in Chemnitz will be used to instead produce power and heat from natural or renewable gas as of 2022.

The price for emitting one tonne of CO2 has increased to over 50 euros under the European Emission Trading System (EU ETS), meaning that it becomes more expensive to operate power stations that have a high CO2 intensity.

According to Germany’s coal exit law, the last lignite fired power station has to be discontinued by 2038. While there is a set phase-out time table for large lignite plants, hard coal stations and small lignite units can participate in auctions for receiving payment in return for closing down.

Despite the fixed end date in 2038, federal environment minister Svenja Schulze has said that she expects an earlier phase-out of coal power generation in Germany, due to rising CO2 prices. C

limate activists and analysts such as from think tank E3Ghave pointed out that Germany’s new climate target of becoming greenhouse-gas neutral by 2045 cannot be achieved if emissions from the energy sector aren’t cut quicker than foreseen in the coal exit legislation.

At the same time, the German government is under pressure for the compensation payments agreed with large lignite operators RWE and LEAG for closing their plants, which are currently scrutinised by the European Commission as to whether they are in line with EU State aid rules.