Oil Drops 4.5% In Single Day: At What Price Does It Find Support? 4 Charts. 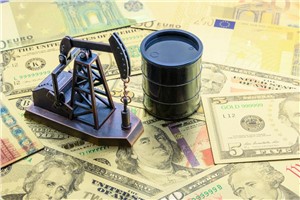 The price of West Texas Intermediate crude oil dropped almost 5% overnight and returned to the $50/barrel level before bouncing slightly. This benchmark for global petroleum costs is quickly back to the same price it hit in June — after rallying all the way up to 60 during July.

That this sudden movement is seen at a time when bonds are rallying (and yields are shrinking) might indicate that something fundamental is changing, perhaps significantly, with the global economy. That gold seems to have found new buyer interest lately is the icing on the cake here.

Will an interest rate of near zero spur the economy? The price of oil seems to be saying "I don't think so."

The support level on the daily price chart is just above 50. That's where it bounced today and that's not all that surprising since that's the price at which buyers showed up back in early June.

A close or 2 below that level might suggest a more significant problem for oil bulls. April's peak of 66 is beginning to seem very far away as Ichimoku cloud turns downward.

The wide range in price is clear from this view: from the peak of above 76 in October of last year to the plunge low of 42 in December. The rally off of that bottom has failed to make it higher than 66 before trending downward again.

You can make out the importance of the support level at just above 50. If that price is taken out, then that 42 spot is where buyers appeared last time around.

The oil price has been in a downtrend since the financial crisis of 2008: you can see the line connecting the peak in that year of 145 to the next lower peak in 2013 at 110. The shorter-term uptrend line from the 2016 trough would be negated with a close below about 47 or so.

I like the different kind of perspective you can find looking at a point-and-figure chart — a type of price chart created decades before computers when they used to do it by hand. You can see the solid downtrend in place and the importance of the 42 support level.

If the idea behind lower interest rates is to spur economic activity, then you would have to say that it's odd to see oil prices dropping like this. Typically, since that type of activity requires the increased use of petroleum, you might expect higher prices of the commodity.We're seeing an unusual mix of indicators from different markets right now.

Tell a friend:
Oil Drops 4.5% In Single Day: At What Price Does It Find Support? 4 Charts.