This news is classified in: Sustainable Energy Solar Wind 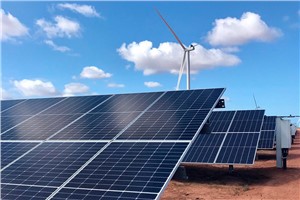 Iberdrola has started the commissioning in Australia of its first wind-solar hybrid project in the world, Port Augusta, after being registered in the National Electricity Market Registry by the Australian Energy Market Operator. This renewable facility, located in the state of South Australia, combines 210 MW of wind power with 107 MW of photovoltaic power and has required an investment of A$500 million.

Comprising 50 wind turbines and 250,000 solar panels, the complex is the largest wind-solar hybrid farm in the southern hemisphere. The plant will prevent the emission of 400,000 tonnes of CO2 per year into the atmosphere and will be able to generate enough clean energy to supply the equivalent demand of 180,000 Australian households.

The project thus enters the full generation phase with the commissioning of the photovoltaic modules, in addition to the wind power part of the installation, which began the first tests to export energy to the grid last April.

The project, which has generated 200 jobs during its construction, has involved local, global and Spanish suppliers. Specifically, the Spanish company Elecnor was responsible for building the plant's substation and transmission line, as well as the storage areas and access roads. Vestas has manufactured and installed the 50 wind turbines of 4.2 MW unit capacity in the wind farm; Longi has supplied the solar panels for the photovoltaic plant and Sterling&Wilson has been in charge of its construction.

The commissioning of Port Augusta will make a significant contribution to achieving South Australia's ambitious targets; it hopes to achieve 100% renewable energy by 2030. In addition to facilitating decarbonisation, the plant will help reduce consumer electricity prices and advance energy self-sufficiency. To generate the same amount of power as Port Augusta will produce with a traditional combined cycle would require around 155 million cubic metres of gas per year.

Iberdrola, leader in a growing market
Iberdrola has made a strong commitment to the Australian energy market. The company plans to make a major investment of up to 3 billion euros in the country, with the aim of reaching 4,000 MW of renewable energy in the coming years.

Iberdrola has already committed more than A$1 billion (around €700 million) to new renewable growth projects, such as the Avonlie solar farm in south-western New South Wales and the Flyers Creek wind farm in central New South Wales.

The company also acquired the rights to the world's largest wind farm at Mount James, with 1,000 MW, the 360 MW Broadsound photovoltaic power station in Queensland and has invested in a smart solutions business, Autonomous Energy, which offers tailored energy products for commercial and industrial companies.

With these investments, Iberdrola has a mature portfolio of more than 2,000 MW in development projects that will facilitate the consolidation of renewable energies as the main vector of the energy transition in the country.

The electricity market in Australia is undergoing a profound transformation from a centralised generation system based on large fossil fuel facilities (coal and gas) to a system of distributed generation, primarily wind and solar power.

The Iberdrola group was a pioneer in its commitment to a sustainable growth strategy based on promoting the electrification of the economy through investment in renewable energies, electricity grids and energy storage. Thanks to this vision, the company is today a world leader in renewable energies, with close to 39,000 MW of renewable capacity installed worldwide, and is a leader in the energy transition towards a low-emission economy and energy self-sufficiency.