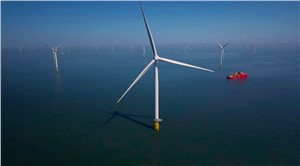 Australia may soon be host to a new source of renewable energy after long awaited legislation that will enable offshore wind projects to be built in commonwealth waters was finally tabled in parliament on Thursday by federal energy minister Angus Taylor.

Offshore wind has stunned many in the industry for its ability to rapidly reduce costs in recent years, and it is now the major focus of multi-gigawatt scale projects in Europe, north America and Asia.

Australia has excellent offshore wind resources, particularly in the southern half, and there are about 12 prospective projects identified by a range of ambitious developers. But none have been able to built yet because there is no legislation that allows it.

Taylor, who made his name as an opponent of land-based wind farms before he entered parliament, said offshore wind presented an “exciting opportunity” for Australia, and noted a number of developers who had expressed interest in building such projects.

“This will deliver significant local benefits,” Taylor told parliament as he introduced the bill that will provide a regulatory framework and clarity over access arrangements. “It will help secure a more reliable energy system … and put downward pressure on wholesale prices.”

The Australian Energy Market Operator has identified four significant offshore wind zones off the coast of NSW, Victoria and Tasmania, with a total nominal capacity of around 40 gigawatts. All are located close to ports that could also serve as major renewable hydrogen export hubs.

That 40GW – identified in its massive 2021 Inputs, Assumptions and Scenarios report prepared as part of its Integrated System Plan, its 20-year blueprint for the energy transition – doesn’t include Western Australia, which also has strong offshore wind resources and a number of project proposals.

The most advanced offshore wind project in Australia is the 2.2GW Star of the South proposal off the coast of Victoria, which is in the process of seeking environmental approvals and has already mapped out an (underground) transmission route to the Latrobe Valley.

Andy Evans, who was involved in the initial work on Star of the South, and who is now pursuing a number of other offshore wind projects, including off the Newcastle and Illawarra coasts with OceanEx, says the bill will be a “kick-start” for the industry.

“There is a big appetite for offshore wind … and this legislation will provide opportunities to progress,” Evans told RenewEconomy.

“We are super positive about it. It will provide the ability to apply for 7-year feasibility licences, and allow the minister to declare zones.”

Star of the South CEO Casper Frost Thorhauge said the company will look at the Bill in detail to understand what it means for the development of its project off the coast of Gippsland.”

“This legalisation is a key step to realising Australia’s offshore wind potential and unlocking the associated economic benefits, including providing opportunities for the nation’s strong resources and maritime sectors,” he said.

Evans from OceanEx says the clarity over the legislation is important given that project developers would likely need to spend up to $200 million to get a project to financial close.

He said it was an industry that would be likely dominated by major energy players – such as RWE, Iberdrola, Macquarie and Equinox, along with big oil companies such as Shell and BP that are also expanding into offshore wind.

“We expect to see many of these companies get involved. They always said we just need to understand what the rules are,” Evans said.

Taylor said the new legislation would give clarity, and support projects such as Star of the South, the proposed Marinus transmission link from Tasmania to the mainland, and the massive Sun Cable project, which is looking to build the world’s biggest solar farm and battery storage facility in the Northern Territory.

Sun Cable CEO David Griffin said the company was not planning an offshore wind component, but the legislation was needed because it would clarify sub-sea access rights critical to its plans to lay a cable from Darwin to Singapore to transport the solar power to clients in Asia.

Labor’s climate and energy spokesman Chris Bowen said that after months of calls from Labor, the government is finally introducing offshore wind legislation.

“There’s several projects and thousands of regional jobs waiting off traditional energy regions including the Hunter, La Trobe and Illawarra,” Bowen said in a statement.

“The government has strangely sent their own bill to a senate inquiry, we hope this isn’t a sign they still aren’t convinced of offshore wind’s benefits for regional industry.”

Tell a friend:
Offshore Wind Set for Take Off in Australia As Legislation Tabled in Parliament