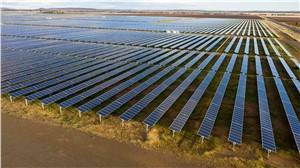 Plans to establish a renewable hydrogen hub in South Australia’s Whyalla region, and power it with more than a gigawatt of solar and storage, gained ground this week with a site locked in for the first of three solar and big battery projects.

Canadian outfit Amp Energy said on Wednesday that land had been secured for construction of the 388MW Yoorndoo Ilga solar and battery project, with the execution of an agreement for lease with the Barngarla Determination Aboriginal Corporation.

The Yoorndoo Ilga Solar Farm, which will include a 150MW battery (energy storage duration not specified), is one of three South Australian solar and storage projects recently snapped up by Amp Energy as part of a $2 billion plan to create a renewable hydrogen production hub.

The Renewable Energy Hub of South Australia (“REHSA”) will be fed by more than 1,300MW of new solar generation capacity with up to 540MW of big battery capacity (MWh not specified), including the 636MW Robertson project and the 336MW Bungama project – all originally developed by EPS Energy.

Amp said that the lease agreement for the Yoorndoo Ilga project related to land recently secured by BDAC after the SA government’s recognition of the Barngarla People as native title holders of large parts of the Upper Spencer Gulf and Eyre Peninsula.

With land secured, and once development and other approvals were completed, Amp said YIS would create up to 400 equivalent full-time jobs during construction and generate electricity production to power the equivalent of 100,000 homes each year.

The Barngala Corporation said it welcomed the deal with Amp, and looked forward to the benefits of the solar project to its members and to the broader community of Whyalla.

“This is a history making deal and we look forward to Amp developing these projects on our traditional lands, which we now own in fee simple,” said the BDAC Board in a statement.

“Barngarla are proud to be part of the renewable energy revolution in Whyalla and could not think of better partners than Amp and EPS to bring this project to fruition.”

For its part, Amp said it recognised the “significant history and culture” of the traditional owners of the land and
sincerely appreciated the support and trust of the BDAC.

Amp already owns a portfolio of 158MW of solar projects in Australia, after first entering the local market in 2017, including the 39MW Molong solar farm near Orange that commenced full generation in December last year.

Amp said in May that the company’s expansion into South Australia market would see it deploy its Amp X digital energy platform, which provides solutions for grid management, including virtual power plants, demand response services and the optimisation of distributed energy resources like rooftop solar and battery storage.

”The strategic value of the South Australian portfolio is significant in a jurisdiction which is undergoing one of the most rapid energy transitions in the world,” head of the newly formed Amp Australia, Dean Cooper, said in a statement at the time.