World's Biggest Solar and Battery Project is About to Get a 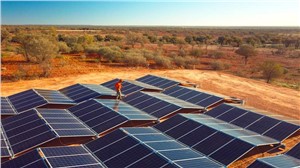 Sun Cable, the world’s biggest solar PV and battery storage project, is about to get a lot bigger after the company crunched the numbers on scale and technology costs and decided that bigger was even better.

The Sun Cable project, backed by  billionaires Mike Cannon-Brookes and Andrew Forrest, started out as a 10GW solar project in 2019, before increasing its planned capacity to 14GW, as well as between 20 and 30 gigawatt-hours of battery storage.

Its detailed plans and timelines are starting to take shape and, in late September, the company is expected to announced the details of its expansion, and possibly reveal some new customers.

“With the passage of time we been able to undertake a lot more research into the nature of the resource – the solar resource – and the technology roadmap for photovoltaics and storage, and the load profile of our prospective customers.

“When you put all that together, that demonstrates we can achieve a significantly larger installed capacity at that site and, to some degree, it would be optimal to do that to better serve the loads we are seeing.”

Griffin wouldn’t say so, but the expansion and the mention of load profiles suggests that green hydrogen and/or green ammonia could be part of that expanded plan, given the massive push – by Forrest, in particular – towards green hydrogen as the major new component of green industry in the coming decades.

Forrest has spoken of his ambitions to have 20 million tonnes of green hydrogen production by the end of the decade, an amount that would require tens if not hundreds of gigawatts of renewable energy projects.

Forrest’s Fortescue Future Industries has talked a lot about plans in general, but has cited no specific projects, and it would be surprising if Sun Cable did not feature somewhere, notwithstanding its goal of running a 3,500km cable to Singapore and supply that country with cheap and clean electricity.

Griffin did say that Sun Cable hopes to construct an 800MW transmission network linking the site of its project on a cattle station some 750km south of Darwin to the Northern Territory capital’s grid.

“We will have more to say about that next month,” Griffin said. “Our view is that we are best placed to deliver competitively priced and dispatchable power to whoever needs that electricity.

“There are lots of industries that want deliveries of cheap and clean power in Darwin and in Singapore, but they need the price of electricity to be right, and the profile to be right. We can do that.”

Griffin would not say by how much the 14GW capacity of the solar component would increase, but said that the battery storage component – previously estimated at between 20 and 30GWh – would increase accordingly.

Interestingly, he said that wind – despite having an “OK” resource in the region – was not part of the plans at the moment, as it would not fit in with the timelines the company envisages.

That makes the Sun Cable project unique among the ranks of “mega” projects currently contemplated, in that it will rely on a single energy source – solar – which of course only produces during the day, and significant amounts of battery storage.

Other proposals such as the 26GW Asia Renewable Energy Hub in the Pilbara, and the 50GW Western Green Energy Hub project north of Esperance – both put forward by Intercontinental and CWP Global – are looking at combining wind, solar and battery storage.

The fact that Sun Cable is looking to deliver up to 800MW to the Darwin grid by 2026 is significant because it points to a major new customer for renewable energy as the local grid currently has average demand of just 150MW.

The Northern Territory has been struggling with the transition to renewables, and to meet its 50 per cent renewables target by 2030, because of a series of rule changes has made it impossible to connect four new solar farms totalling around 55MW.

See: “Scared of solar:” Why the Top End’s first big solar farms are not switched on

That dispute is ongoing, and had raised questions about whether the NT could reach its target. But if Sun Cable’s plans do go ahead, and a new transmission network with 800MW of capacity is delivered, then it would likely meet that target, and more, in one fell swoop.

Tell a friend:
World's Biggest Solar and Battery Project is About to Get a Lot Bigger