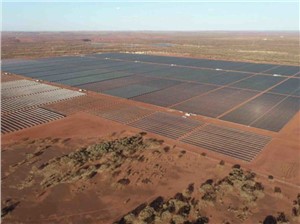 Energy utility Alinta has unveiled plans for a 90MW solar farm and a four-hour big battery near Port Hedland in Western Australia, part of a major new power play that will set new benchmarks for solar and battery storage   in Australia.

The plans are for a 90MW solar farm near Port Hedland and a 30MW/120MWh big battery adjoining the existing gas generator in the same area, and both will be the largest of their type away from a major grid in Australia, and the battery may end up being the first four-hour installation in the country.

The plan, first unveiled by Alinta at the Pilbara 2021 regional conference last week, heralds the rapid growth of renewables and storage in the major mining region in the remote north-west, an area that until a few years ago saw little alternative to their complete dependence on expensive and heavily polluting fossil fuels.

Alinta has already built a hugely successful big battery at Mt Newman, and is just completing the finishing touches to its 60MW Chichester solar farm (pictured above) that will help power the huge mining operations of  Andrew Forrest’s Fortescue iron ore group.

Fortescue is also looking to add large scale solar and big batteries at its new mines, as are Rio Tinto and BHP and even Gina Rinehart’s Roy Hill at their respective mining operations. The miners’ plans go well beyond just providing power for mine sites, however, with Fortescue and others looking for massive multi-gigawatt scale projects for renewable hydrogen.

Alinta’s strategy at Port Hedland is to use the new solar farm and the four-hour big battery to respond to demand from its corporate customers for cleaner energy.

“Corporates in Australia are looking for low carbon power solutions, and are looking to the market to provide them,” Alinta’s head of strategy Gary Bryant told RenewEconomy in an interview.

Alinta operates a discreet network within a bigger grid operated by Horizon Energy that supplies customers in and around Port Hedland. The 90MW solar farm will provide up to 100 per cent of its customers needs during the day, while the battery will be used to time-shift excess solar into the evening.

That’s the main difference between the Mt Newman battery, which at 35MW/12MWh deliberately has just 20 minutes storage because its principal role is to allow Alinta to switch off the gas generators normally used to back up the operating gas turbines (yes, even fossil fuel generators need back up).

The Port Hedland battery will have up to four hours storage to store excess solar, and also to allow the Port Hedland gas turbines to be operated at full capacity in the evening. These will charge the battery, which can then be discharged once or twice during the night, before repeating the process during the day.

Bryant says this will deliver significant fuel and carbon savings from the operation of the gas generators, because operating the turbines at full rather than partial capacity delivers increased efficiency.

But Alinta is also looking to add wind energy to provide clean power overnight. It is currently looking at four or five locations for a potential wind farm in the region, also with an eye to the considerable increase in electricity demand expected from the switch to electric transport and the creation of renewable hydrogen hubs.

“Solar is very predictable, but wind energy is the key to getting costs down,” Bryant said. “Time shifting energy through a battery does come to a cost, and the cost of wind is less than solar and a battery.”

But Bryant also says that while four-hour storage is not economic yet on Australia’s main grid, the combination of solar and battery storage is competitive with the gas generation on grids in the country’s remote north-west.

“We want the battery to time shift solar – from the daytime to the night-time. When the battery runs down to a lower state of charge we can run the gas turbines at full load and charge the battery. That saves carbon because it is more efficient.”

Environmental approvals have already been submitted for an upgrade to the Port Hedland gas generator, with the idea of building more fast-start reciprocating engines that are more flexible, but this may not be built out to capacity due to the added idea of solar and a big battery.

Another potential development is the increased connection between the four distinct networks in the North West Interconnected System that are operated by Horizon (Port Hedland to Karratha), Alinta (to mining customers), Rio Tinto, and the new one to be built by Fortescue, with its own solar and big batteries.