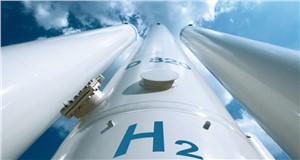 Putting aside the incredible spectrum of emotions that seem to be surrounding hydrogen as a technology, a concept or a political symbol, it is very much a thing worth paying very close attention to. In terms of a substance used industrially, it is quite old, but as an energy technology – or a climate technology – it is very new.

A debate exists about exactly what it’s good for. Hydrogen maximalists insist that it’s basically good for everything: chuck it in power plants, chuck it in cars – it’s magic. You can also find people who truly cannot abide the possibility of a single stray molecule being used in a decarbonised economy. It burns cleanly when it’s used as a fuel and can be stored in greater quantities than electricity, but it’s explosive, tricky to make, and tricky to store.

What matters most to me is whether it serves as a tool for accelerating decarbonisation, or slowing it down. And with hydrogen, it’s always both – full of potential, and full of danger.

How it’s made matters
It’ll be a force for good if its production is consistently zero emissions. That is, it’s produced using a zero emissions technology like hydro, wind or solar. This can be done using a process called electrolysis.

Unfortunately, it is currently notably cheaper to produce hydrogen using fossil fuels – that is, coal and gas. Converting these carbon fuels into hydrogen using high-emissions processes does its own climate damage, but there is a second, more alarming problem: that unit of energy can now be physically and politically separated from its emissions impact.

Recently, Australia’s federal government has taken another step in trying to carve out a space for fossil hydrogen – a big space, probably really the majority of the space. They’ve initiated the process of making a ‘Guarantee of Origin‘ (GO) scheme for hydrogen. It is, on paper, quite a good idea. It means a company making hydrogen from wind or solar can be verified independently, using a clear methodology – this is an extremely good thing.

But hydrogen has two sides, remember? And the government’s GO scheme discussion paper raises some troublesome ideas, too.

In defence of this document, it is very clear and accurate about the risks. Carbon capture, utilisation and storage (CCUS), and the purchase of offsets, are both offered as ways for the emissions footprint of fossil hydrogen to be reduced, and reported as reduced under the GO scheme.

But both are risky. “Of primary importance is the integrity of the capture, removal and storage of CO2 from the atmosphere. There are concerns about the risk of reversibility of carbon storage and this is particularly important in ensuring the validity of any CCS claims”, writes the paper, on CCUS. In other words: what happens to the carbon, once it’s captured? Is it stored deep the under the crust of the Earth, as it was before it was dug up and burned by fossil fuel companies?

“It is proposed that CCUS provisions should be limited to emissions permanently stored in geological formations until robust international accounting provisions are developed for other forms of CCUS,” they write, but the release of the paper comes along with changes to the National Greenhouse and Energy Reporting scheme’s (NGERS) method for reporting emissions from hydrogen production. “The method allows for the deduction of carbon dioxide that is captured and transferred for permanent storage or for use in another facility.”

That amendment also comes with the inclusion of a process known as ‘enhanced oil recovery’ to NGERS. This is when captured CO2 is injected deep into underground fossil reservoirs to help get even more fossil fuels extracted from the ground. It’s often unclear whether that injected CO2 stays underground, but the fact that this carbon capture is being used specifically to aid greater quantities of the problem it purportedly solves is a darkly cynical joke.

Will any carbon captured in making hydrogen be stored permanently underground, or will it just change hands? Will it be used in the process of producing more fossil fuels?

The offset problem
Offsets are a serious problem, too. These fall into two categories. The first is negative emissions – when, say, a machine sucks one tonne of carbon dioxide from the air. The second is “avoided emissions” – when building a wind farm avoids 1 tonne of carbon emissions that otherwise would’ve come from coal, without the action to build the wind farm.

The concept of “avoided emissions” was brilliantly parodied in the video “murder offsets,” by the Climate Ad project. Suffice to say, the math does not work out. And as mentioned previously, “negative emissions” depends on what you do with the carbon you suck up. Stored permanently deep underground? Good. Stored in a tree that’ll burn down next year? Not good.

The GO scheme discussion paper proposes two options: don’t allow offsets, or do. Option 2 would inflate the price of Australia’s growing carbon market – the preferred decarbonisation method of the federal government. “There is a risk under this option that Australia’s scheme may end up inconsistent with international developments” the paper writes. If there is one thing we can say this year about Australia’s government, it is that being inconsistent with international developments is really not a problem for them.

Fossil hydrogen is already being offset. A project in Victoria to produce hydrogen directly from coal will create stunning quantities of greenhouse gas emissions but proponents claim that will all be captured using as-yet unspecified CCS technology, at some vague point in the future. So far, 3 tonnes of hydrogen has produced 100 tonnes of CO2, which was ‘offset’ using certificates.

There is already a rapidly growing problem of fossil fuel companies attempting to sell “carbon neutral oil” or gas. All this entails – literally – is them digging up and selling fossil fuels normally, but buying a clump of offset certificates that usually only relate to the emissions from it being produced (and exclude emissions from when it’s used).

Both CCUS and offsetting serve as ripe substrates for greenwashing, confusion and misdirection in terms of fossil fuel companies attempting to hydrogen-wash their climate harms. Australia’s fossil fuel industry is extremely good at twisting and shaping legislations, regulations and schemes to serve their interest, rather than the interests of society. Fundamentally, the phrase “technology neutral” – which this scheme purports to be – means ignoring the political and industrial force acting on these schemes to ensure emissions are maximised.

Hydrogen truly is filled with both potential and threat. All that means is that we really, really can’t look away.

Tell a friend:
An Offset Loophole Could Be the Saviour for High Emissions Fossil Hydrogen