Garden Island Microgrid Up and Running After Connection Upgr

Garden Island Microgrid Up and Running After Connection Upgrade 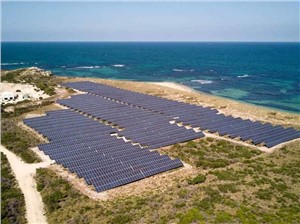 Operations at the Garden Island Microgrid, which powers naval facilities off the coast of Western Australia, have resumed operations after upgrade works undertaken by the Department of Defence.

In a statement to the ASX, Carnegie Clean Energy said that generation had resumed from the company’s 2MW solar farm, and 2MW/0.5MWh battery storage system that serves the Garden Island Microgrid, a project that had initially been designed to incorporate some of Australia’s first supplies of wave generated electricity.

The Garden Island Microgrid supplies power to the HMAS Stirling naval base, and is located just off the coast near Fremantle and was designed to provide the potential for a future connection to an off-shore wave energy generator at some point in the future.

“Once the relevant construction and programming was completed by Defence’s contractors, Carnegie was able to reconnect and test the new connection. With this testing complete, Carnegie has now been approved to recommence normal operations of the Garden Island Microgrid,” Carnegie Clean Energy’s statement says.

The $7.5 million microgrid project had been completed with the support of a $2.5 million grant from the Australian Renewable Energy Agency.

Carnegie Clean Energy had been one of Australia’s leading hopes for the development of a workable wave power technology, with the company developing the innovative CETO wave power device that used a submerged buoy to draw energy from the ocean’s waves.

The company had secured a number of major funding agreements to develop the wave technology, and in 2016 the company sought to diversify its operations and revenue streams through the acquisition of solar and micro-grid company Energy Made Clean in a $16 million deal.

It is understood that the remnants of the Energy Made Clean subsidiary were offloaded by Carnegie for just $200,000.

The company received a number of substantial grants from the Federal and Western Australian state governments, but has yet to see any major deployments of its wave energy technology.

The deal proved ill-fated, with the solar business failing to deliver upon a number of major solar projects, and ultimately becoming a financial drain on the parent company, rather than a way to support the development of its flagship wave technologies.

In September 2019, Carnegie Clean Energy raised $5.5 million through an additional share-issuance to re-capitalise the company after a number of funding agreements were terminated and the value of its existing projects being written down, with the company focusing its efforts on the development of its wave energy technologies through computational modelling, rather than through the construction of expensive real-world prototypes.

Carnegie Clean Energy’s shares have traded at the ASX minimum of 0.1 cents per shar

Tell a friend:
Garden Island Microgrid Up and Running After Connection Upgrade