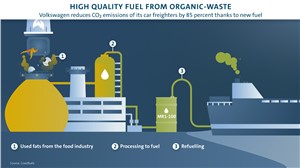 In order to reduce its CO2 emissions, Volkswagen is not only focusing on e-cars and climate-neutral production, but is also looking at the sea transportation of its vehicles. In order to operate car carriers in a more climate-friendly way, the Group is relying on fuel made from used vegetable oil from the catering and food industries.

Whether used vegetable oil from the catering and food industries or other vegetable residues: What was worthless waste a few years ago can now power ships. Volkswagen is the first automaker to use this refined biofuel in its charter ships for some of the new vehicle shipments on European sea routes.

The name of the miracle fuel: MR1-100. Old cooking oils and fats from the catering and food industries can serve as raw materials for the biofuel. Similar to E10 gasoline for cars, the number stands for the proportion made from renewable raw materials. MR1-100 therefore consists of 100 percent organic waste products.

“We are the first automaker to use this fuel on a large scale. In this way, we are putting the old oils to a climate-friendly subsequent use. With 85 percent less CO2 emissions compared to conventional fossil fuel, the contribution to climate protection is enormous,” says Thomas Zernechel, Head of Volkswagen Group Logistics.

The fuel is produced by the Dutch company GoodFuels in Rotterdam. Shipping companies can use the renewable fuel to replace sulfurous heavy fuel oil on a one-to-one basis. No modifications to the engine are necessary.

No sulfur oxide emissions
The change to more environmentally friendly shipping is also being pushed by lawmakers. Starting this year, shipping companies are required to retrofit their fleets of ships so that the engines comply with a sulfur limit of 0.5 percent.

In coastal sea areas, 0.1 percent applies. Previously, 3.5 percent was permitted in large parts of the oceans. This is not a problem for ships running on MR1-100: the new biofuel does not emit any sulfur oxides at all.

So, it seems almost logical that Volkswagen wants to be a pioneer in climate-friendly mobility with its vehicles not only on the road, but also on the open water. By 2025, the Group aims to reduce its total CO2 emissions by 30 percent per vehicle in line with its environmental mission statement “goTOzero” and to be CO2-neutral in 2050.

As recently as June, Volkswagen Group Logistics began using car carriers powered by liquefied natural gas (LNG) to transport vehicles from Europe to North and Central America. Equipped with DualFuel engines from MAN Energy Solutions, these can also use LNG generated from renewable sources in the future, making them even more climate friendly. In addition, the Group intends to switch completely to green electricity for rail transport movements with DB Cargo in Germany by the beginning of 2021.

Volkswagen is now taking the next step in shipping within Europe. Group Logistics is using two charter ships for near-coastal car shipments. The ships, each 180 meters long, are owned by the F. Laeisz shipping company in Hamburg. They are powered by a MAN marine engine with 14,220 KW (19,334 PS). The tank volume (bunker capacity) is 3,500 cubic meters.

Space for 3,500 vehicles each
The ships can each transport 3,500 vehicles. They transport new vehicles on a circular route from Emden to Dublin, from there on to Santander in Spain and Setubal in Portugal before returning to Emden. Each year, they transport around 250,000 new vehicles from the AUDI, ŠKODA, Volkswagen Passenger Cars and Volkswagen Commercial Vehicles brands. If the ships are refueled with biofuel, they save a total of around 52,000 tons of CO2 per year.

Besides Goodfuels, other manufacturers also offer fuels with a proportionate organic content, but always mixed with fossil fuel. The Dutch company, on the other hand, relies 100 percent on sustainable raw materials. In September 2018, GoodFuels tested MR1-100 for the first time on the tanker “Nord Highlander”, followed by further trial runs with other ships in 2019. Now Volkswagen is pushing the issue further. In this way, the Group is not only making its supply chain even more climate-friendly, but is also setting an example for other companies.