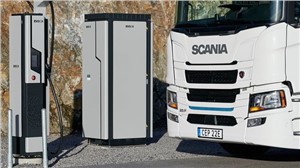 Scania has now issued its first green bond. About 30 Nordic banks, insurance companies and pension fund managers participated. The bidding resulted in Scania raising loans totalling SEK 1.25 billion with a 4-year maturity for investments that the company is making to convert to production of electric vehicles.

It was at the end of 2020 that Scania – as the first pure manufacturer of commercial vehicles – received approval for the company's framework for issuing green bonds.

The Green Bond Framework constitutes the basis for identifying, selecting, verifying and reporting projects that are eligible for financing by green bond proceeds. Well-established Norwegian CICERO Shades of Green has rated the framework ‘dark green’, which is allocated to projects and solutions that correspond to the long-term vision of a low carbon and climate resilient future.

Scania has set ambitious carbon-reduction goals as underwritten by the Science Based Target initiative. These include that from 2015 halving carbon emissions from its own operations by 2025 as well as reaching a 20-percent reduction of CO2 emissions from its trucks, buses and engines when in use, which constitutes more than 95 percent of Scania’s environmental impact. Scania has already reached its 2020-target to transition all its ten major production facilities worldwide to fossil-free electricity.

In accordance with the Green Bond Principles, proceeds will be managed in separate accounts and the allocation transparently reported with the obtained carbon savings.