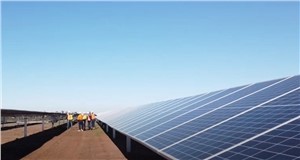 Plans to develop a massive new renewable hydrogen production facility near Kalbarri in Western Australia, with up to 5,000MW of combined solar and wind projects to supply it, have won the backing of Denmark’s Copenhagen Infrastructure Partners, or CIP.

Hydrogen Renewables Australia said on Monday that it had agreed to partner with CIP on the massive project, which is proposed for the Murchison House Station on the state’s mid-west coast – an area identified by engineering firm AECOM as a prime position for the co-location of wind and solar projects in Australia.

The goal of the project is to use these premium solar and wind energy resources, along with desalinated sea water, to produce renewable hydrogen for export to Asian markets, with an eye to Japan and Korea.

As RenewEconomy reported here in October of last year, HRA has already locked in the backing of major global equipment provider Siemens, as the intended technology partner for the project, and had been looking for further potential investment support.

“Our partnership with CIP will enable the Murchison Renewable Hydrogen Project to proceed with its planned development to assess the feasibility of producing competitive hydrogen exports for the Asian market,” said HRA executive chairman Terry Kallis in a statement on Monday.

Kallis and CIP are already known to each other through their work together on what is shaping up to be Australia’s first ever offshore wind farm, the 2,000MW Star of the South, being proposed off the coast of Victoria.

Kallis is a founder and executive chairman of the Australian company behind the project, also called Star of the South, and CIP is a co-owner.

Michael Hannibal, a partner at CIP, said the Danish fund was pleased to be joining forces with HRA on the Murchison project.

“We believe that Murchison represents the best combined wind and solar resource in Australia and the project complements our existing activities in Australia,” Hannibal said.

For Western Australia, the newly boosted Hydrogen Renewables Australia plan is one of two proposed for the state, following the 15,000MW wind and solar facility proposed for the Pilbara by the Asian Renewable Energy Hub, also aiming at the domestic and export market.

Renewable hydrogen is being touted as an ideal replacement fuel for fossil fuels including gas and liquid-fuels.  In an interview with RenewEconomy’s Energy Insiders podcast last year, ARENA CEO Darren Miller said that Australia could one day support up to 700GW (700,000MW) of large scale wind and solar if the renewable hydrogen industry replaces the current LNG market in a de-carbonised economy.