Whoever is Elected US President, Morrison Faces Intense Global Pressure on Climate 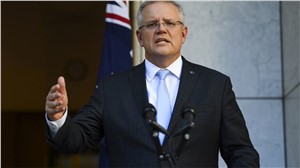 With the US presidential election imminent, the climate change policies of the world’s biggest economy are at a significant crossroads. But whatever the outcome of the election, whether it is a Biden or Trump presidency, Australia is facing mounting international pressure to strengthen its own climate targets.

Australia has a history of hiding under the coat-tails of the world’s biggest economy and its biggest ally. It did it during Kyoto and it is doing the same now. But bit by bit, it is becoming more exposed to global shifts as its major customers, and its traditional friends, push for action.

This past month has seen Japan, China and South Korea all commit to reaching net zero emissions. Next month, world leaders are set to participate in a virtual ‘Climate Ambition Summit’, being organised by United Nations and hosted by the United Kingdom, France, Chile and Italy.

The event will take place during a period when countries would ordinarily be meeting for the next round of international climate change negotiations, but which have been postponed for a year due to Covid-19. Australia is invited, but Morrison won’t be allowed to speak unless he has something meaningful to say on Australia’s climate action.

“We must all maintain our focus on increasing ambition, and there will be no space for general statements,” said British energy minister Alok Sharma, who will serve as the president of the COP26 round of climate change negotiations.

“Announcements must show genuine progress from existing policies and Paris targets. We will give priority to the most transformational commitments put forward. Regardless of whether it is a major economy or smaller climate vulnerable country.

“The Paris goals require us to halve global emissions over the next decade, and to rapidly adapt to our warming climate. Current [Nationally Determined Contributions] put us on track for 3 degrees warming. This is simply unacceptable, we must close the gap,” Sharma added.

The summit is set to place pressure on countries, like Australia, to lift their game on climate action or face being outed on a global stage as a climate change laggard.

Australia has previously been denied opportunities to address major international climate change summits, including the United Nations Climate Action Summit held in New York last year, after it became clear Australia would not be announcing any commitments to strengthen action on climate change.

Prime minister Scott Morrison ultimately snubbed the event altogether, sending foreign minister Marise Payne to represent Australia, despite Morrison being in the United States at the time to attend a state dinner with president Donald Trump at the white house.

Morrison also damaged diplomatic relations with Pacific Island neighbours, by refusing to include stronger language on climate change in the communique of the Pacific Islands Forum last year.

The Morrison government still refuses to commit to a long-term emissions reduction target, despite growing pressure from countries like China, Japan and South Korea and their commitments to zero carbon targets.

These countries are some of Australia’s largest trading partners, and their commitments not only put pressure on Australia to lift its own emissions targets, but also to prepare for a massive reduction in demand for Australian coal and gas.

Australia’s lead climate change negotiator, Jamie Isbister, recently told a hearing of senate estimates that 37 countries had announced formal commitments to zero net emissions targets, with many other countries expressing an ambition to decarbonise their economies.

Isbister was part of a diplomatic corps that burnt through a significant amount of Australia’s diplomatic capital at last year’s climate change negotiations, after delaying the conclusion of the talks, while Australia fought opposition from most other countries on a plan to use surplus emissions credits to meet its Paris Agreement targets.

Australia’s closest international ally, the United States could soon be added to the list of nations committed to achieving zero net emissions by 2050, should democratic candidate Joe Biden prevail in this week’s presidential election.

While the United States is set to withdraw from the Paris Agreement on Wednesday, following the completion of a 12-month withdrawal process instigated by the Trump administration, the withdrawal coincides with a presidential election that will fundamentally shape the United States’ engagement with climate change.

Polls and projections suggest that Biden has the upper hand in the presidential election, but changes in the manner in which voting has been conducted, due to the Covid-19 pandemic and concerted voter suppression campaigns, have left many apprehensive about making any solid predictions about an outcome.

The re-election of Donald Trump is likely to see the country stray further away from efforts to reduce emissions, with the incumbent administration having taken a hostile approach to environmental regulations and any efforts to regulate pollution.

Since taking office, Trump has sought to dismantle Obama-era controls on greenhouse gas emissions and has been in conflict with both environmental groups and the automotive industry for his desires to soften restrictions on vehicle emissions, at the behest of oil lobbyists.

Joe Biden has committed to seeing the United States return as a party to the Paris Agreement, and has committed to a net zero emissions target and a $2 trillion investment in new clean industries.

Biden has also indicated that he will position climate action at the centre of the United States’ foreign relations, and plans to hold his own Global Climate Summit to demonstrate renewed leadership from the United States on climate change. This will include significant pressure on close allies, like Australia, to adopt stronger climate policies.

But whatever the outcome of the US Presidential election, the Morrison government will face growing pressure both domestically and internationally, to make genuine new commitments on climate change.

Tell a friend:
Whoever is Elected US President, Morrison Faces Intense Global Pressure on Climate