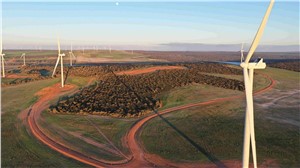 The combined output of wind and solar and other renewable energy sources have overtaken the principal fossil fuel sources of coal and gas generation in Western Australia for the first time in the month of October.

According to data provided by OpenNem.org.au, wind and solar provided nearly 550GWh of output into W.A.’s South West Interconnected System – the state’s main grid – in the month of October. That beat the coal output for the first time (452GWh), and the addition of a small amount of biomass, also beat gas for the first time (553MWh).

Still, rooftop solar still provides nearly half of the renewable energy output in the state, and will continue to grow its share as there are few opportunities for more large scale wind and solar until the next wave of coal fired power station closures, expected in 2023.

The SWIS data base is the latest addition for the OpenNem online facility, which had previously been focused only on the main National Electricity Market based on the eastern states.

“We are really proud to have extended OpenNEM’s reach to include Western Australia’s SWIS network,” Simon Holmes a Court, an analyst with the Climate and Energy Hub, said.

“The golden state is too often excluded from Australian energy discussions, yet the SWIS is important, delivering 40% more energy than South Australia’s grid. We hope that with greater the visibility OpenNEM is now providing, more people will become familiar with WA’s fascinating energy transition.

“Originally from Western Australia, I was pleasantly surprised to learn of the progress WA has made in recent years. The state ranks second, after South Australia, in rooftop solar penetration, ahead of NSW and Queensland and almost equal with Victoria on renewables, and just recorded its first month with renewables as the largest source of power, ahead of gas and coal.”

“Because the WEM (Wholesale Electricity Market that sits on top of the SWIS) has many differences from the NEM, we needed to make extensive changes to OpenNEM’s software architecture. Now that we’ve done the hard yards, it’ll make it much easier for us to bring other countries’ data into OpenNEM.”