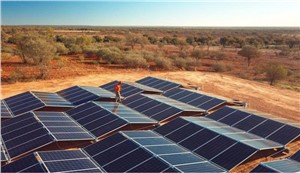 Coalition Senator Dr Sam McMahon has described renewable energy in general – and the proposed 10GW Sun Cable solar farm, the largest in the world and located in the Northern Territory, which she represents – as a “hoax on the gullible.”

The outburst from Dr McMahon, from the Country Liberal Party, came in a Facebook post last week.

“Renewables are the dole bludgers of the the energy mix,” she declared. “They are a great hoax perpetrated by the industry on the gullible.”

And then she went on to talk about Sun Cable, backed by billionaires Mike Cannon-Brookes and Andrew Forrest, and she linked to an article about its  proposed location, a giant cattle farm between Darwin and Alice Springs.

“Yet this Gunner Government thinks it is a great idea to take up huge tracts of productive land, build a solar farm of non-recyclable panals (sic) , the size of which the world has never seen, in an area that is totally hostile to solar panel efficiency and run a 4500km extension cord to Singapore.

“If you think that is a good idea, I have a small block of land with awesome views on Jupiter I’m prepared to sell you at a great price.”

McMahon’s outburst does seem curious given that she only recently she was praising the Coalition’s efforts on renewables, and the Sun Cable project in particular, which has even been given “major project status” by the apparently gullible federal Coalition government.

“In my home of the Northern Territory, investing in a $20 billion solar farm in Tennant Creek has recently been talked about—and we can be so magnanimous with this energy that we are going to generate that we are actually going to run an extension cord to Singapore so that they can use it,” she told parliament last December.

But Dr McMahon (the Doctorate comes from her vet studies) did seem confused in that speech.

While heralding the world-leading uptake of renewables in Australia and the emissions reductions achieved by the government, she also praised Malcolm Roberts, the One Nation Senator who is the most trenchant climate denier in the Senate (and he has some stiff competition), and also slammed the views of leading climate scientists.

“There is no link—nil, zero, none—between the perceived climate emergency and these bushfires,” Dr McMahon declared.

Of course, we’ve seen such comments before. Numerous Coalition MPs – and ministers – openly question climate science. Indeed, around half or more Coalition MPs are considered to be climate denialists, which may explain the lack of a coherent climate and energy policy.

The “dole-bludgers” line is also a favourite of Senator Matt Canavan, the former Resources Minister (who features prominently on McMahon’s website), despite the obvious point that wind and solar farms don’t actually get paid for their output unless they produce. And they are rarely curtailed for producing too much, although they do eat into the profits of the coal and gas industries.

And the good news is that solar panels are recyclable. And efforts are being made to ensure that they are properly re-cycled as they come to the end of their life, which is after about 25 years. But, by Jupiter, let’s not let facts get in the way of a good Facebook rant.