The Environmental Advantage of Electric Cars has Increased Significantly 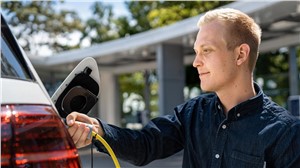 How can politics advance the decarbonization of mobility? This is the question 15 scientists from three renowned research institutes have been working on for two years. Contributors were the Mercator Research Institute on Global Commons and Climate Change (MCC), the Potsdam Institute for Climate Impact Research (PIK) and the Paul Scherrer Institute (PSI). The project was supported by the independent Volkswagen Sustainability Council. Nicolas Koch (MCC) and Christian Bauer (PSI) explain the results in an interview.

Much research has been done on climate protection and mobility – what exactly was the aim of your project?

Koch: The project idea was conceived about three years ago. At that time, it became increasingly clear that the transformation of the automotive sector could progress much faster than expected. On the one hand, batteries for electric vehicles became increasingly cheaper. New players from China and the USA challenged established manufacturers. On the other hand, the transport sector climbed higher up the climate policy agenda in the wake of the diesel crisis. Cities adopted local transport policies with driving bans and road toll systems. What was missing were guidelines for a coherent overall concept. This is precisely what we wanted to create a scientific basis for.

The Volkswagen Sustainability Council supports the project. How can one imagine the cooperation?

Koch: There were several joint workshops with the Sustainability Council and sustainability experts from Volkswagen. This helped us scientists to better understand the decision-making problems faced by companies and politicians. We don’t want to do research in an ivory tower – our results should be socially relevant. That’s why we have compiled our most important findings on selected decision-making problems in brief dossiers on just a few pages. Decision-makers will find answers to their questions – and what else we think they should know.

Bauer: The cooperation with the company was particularly helpful in comparing our data and assumptions with actual experience – for example in the calculation of life cycle assessments. Despite the cooperation, it was always clear that we work independently and do not conduct contract research.

How can your findings advance the climate debate?

Koch: They can help to calm discussions and make them more fact-based. This applies to many controversial questions: How can we make sustainable mobility decisions attractive to consumers? Do we need toll systems and driving bans? Which vehicle technologies are the most environmentally friendly? In all these topics we sometimes have heated debates – detached from the stance of scientific knowledge

One of these debates revolves around the carbon footprint of various engines. What are your findings on this?

Bauer: We need electric cars for effective climate protection. In science, this answer has been clear for some time. However, it has not been possible to adequately communicate the findings to the public. As a result, there are always contributions to discussions that are largely free of expert knowledge. To put it bluntly: if Europe wants to be climate-neutral by 2050, no internal combustion engine should be on the road by that time – at least for passenger cars. At the same time, we must rid the electricity sector of fossil fuels.

How do you explain the fact that there is so much controversy about e-mobility?

Bauer: I see two points. Firstly, there is the justified suggestion that e-mobility only makes sense in combination with sufficient low-CO2 electricity. That is undisputed – the restructuring of the transport sector and the electricity sector must take place in parallel. Secondly, in the car industry I still detect great reservations about transformation, because business models and product ranges have to be completely changed.

Koch: I always find it fascinating how individual studies with the tone that e-mobility is not clean get a forum in scientific journalism. From a scientific point of view, it is good that individuals question the state of knowledge and bring new data into the discussion. But scientific journalism would have to integrate this into the existing knowledge that has been accumulated over the years. This often does not happen.

They say: If you want climate neutrality, there is no way around e-mobility. Why?

Bauer: No matter how fuel-efficient the engines are, it will never be possible to avoid CO2 emissions with petrol and diesel vehicles. In contrast, e-cars have the potential to drastically reduce climate-damaging emissions. The key is CO2-free or low CO2 electricity. In almost all European countries today, e-cars have a clear climate advantage over internal combustion engines. Only Poland and Estonia use an electricity mix that does not give electric vehicles an advantage in terms of climate balance.

One big controversial question is: E-propulsion or hydrogen – what is your answer?

Bauer: I would not play battery and hydrogen cars against each other. Depending on the intended use, one or the other makes more sense. A major advantage of battery cars is that they use electricity more efficiently during operation – by a factor of about 2.5. This is important because renewable electricity is scarce. Also, over the life cycle, including production, battery vehicles use less energy than hydrogen cars. Where their use allows, cars should therefore run on battery power. The advantages of hydrogen, fast refueling and a long range, are particularly evident in truck traffic, where long distances are covered with a heavy load.

What new findings are you taking away from the research project?

Bauer: The climate advantage of electric cars over internal combustion engines has grown significantly in recent years. This is due to advances in battery production, longer battery life and the higher proportion of renewable energies in Europe. Compared to combustion engines, the production of electric cars still requires more energy. However, this is balanced out after a few tens of thousands of kilometers, provided that clean electricity is charged.

Koch: Our research has clearly confirmed how important CO2 pricing is as a political instrument. Up to now, policymakers have focused very strongly on efficiency standards for passenger cars. This is also necessary to bring new technologies to market, but offers no incentive to reduce mileage. On the contrary: if my car is economical, I even have an incentive to drive more than before. This rebound effect partially nullifies the advantages of better technologies.

What demands on politics result from this?

Koch: Take Germany: The planned CO2 price surcharge for petrol and diesel is a good start. In the medium term, however, there is great uncertainty about how prices will develop. This is damaging because it delays investments. This is where we should make improvements – preferably with a cross-sectoral European solution. Incidentally, it is by no means the case that a CO2 price must be socially unfair. On the contrary: a large part of the population can benefit financially if the state returns the revenue according to a fair system.

Bauer: The state should become even more involved in the expansion of the charging infrastructure. And it must create better conditions for charging at home. After all, it is not acceptable that the co-owners in an apartment building can forbid me to install a wallbox.

What do you expect from car manufacturers?

Bauer: For passenger cars, we need a complete switch to battery vehicles. Volkswagen’s strategy is exemplary in this respect. If all manufacturers were to do this, an important part of the problem would be solved. It is just as important that affordable e-cars are on the market. You don’t achieve a mass effect with vehicles for 100,000 euros.

Koch: Also, in the economic crisis, we should not fall into automatic habits and reflexes, as could be observed in the discussion about a scrappage incentive. A scrappage incentive for combustion engines is not helpful in shaping the future. Other approaches – keyword e-mobility at Volkswagen – are far more refreshing.

Tell a friend:
The Environmental Advantage of Electric Cars has Increased Significantly