How Volkswagen is Navigating its Charter Ships Through the Crisis 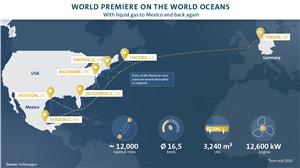 During these days, when Nina Cordes-Klasing powers up her laptop in her home office in the morning, the first thing she looks at is her inbox. “There have been a lot of unpleasant surprises recently,” says the 44-year-old, who works in Overseas Vehicle Logistics at Volkswagen. Together with her colleagues from Planning and Transport Management, she coordinates the Group’s worldwide vehicle shipments. Be it from South Africa to Australia, from Germany to the USA or from Mexico to Japan.

Last year, around 2.7 million Group vehicles, or about one in four of the almost 11 million vehicles delivered, first went on a sea voyage before being put on the world’s roads. If these vehicles – from the Seat Leon to the Volkswagen Tiguan to the Porsche Taycan – were lined up side by side, this would roughly correspond to the distance from one of the poles to the equator. Volkswagen books some of these vehicles onto scheduled ships operated by shipping companies that transport all kinds of rolling cargo. So, the T6 from Volkswagen Commercial Vehicles sometimes travels side by side with excavators and tractors from Europe to Asia or Africa.

However, the Volkswagen Group is the only car manufacturer to use its own charter ships – and has been doing so since the 1960s. Eleven of these charter ships are currently in service for the company worldwide, each of them offering space for up to 4,700 vehicles of the various Group brands. “The advantage of having our own charter ships is that we can determine the schedules ourselves,” explains Cordes-Klasing.

After her training as a forwarding agent and subsequent business studies degree, she joined the group logistics department – where she has always been involved in the planning and control of international shipping. “This is an extremely exciting and varied field of work.”

Most of the charter freighters in service for the Group are deployed on the North American route, as so-called round the clock ships. From Emden, they leave fully loaded for the US East Coast, where the vessels destined for the US market are offloaded. From there, the ship continues on to Mexico, where it is first unloaded and then reloaded. With another stopover in the USA, the ship then returns to Germany. Length of the tour: about 12,000 nautical miles. Duration: 45 to 50 days.

But back to the unpleasant surprises in Nina Cordes-Klasing’s inbox. While the corona-related production stop at the German plants was foreseeable, they were unprepared for some other news, says the mother of two. For example, the charter ship that was not allowed to enter Canada because two crew members were ill. The Canadian authorities, without even having carried out a corona test, had ordered that the ship should remain off the coast for two weeks. Isolation at sea, if you like. “This, of course, has thrown the whole timetable out of kilter.

The situation became particularly difficult at the end of March, when the port of Emden temporarily suspended operations. As a result, ships coming from Mexico with Audi Q5 and Tiguan long-wheelbase on board cannot currently be unloaded and reloaded. For Cordes-Klasing this means: crisis management. From her home office in Wahrenholz in the district of Gifhorn, she is in constant contact with her colleagues in the control department, the shipping companies and the legal department and prepares decision papers for the management. “We have to reassess the situation from day to day and look for solutions,” says the shipping planner. If plan A fails, then plan B is the way to go. And if possible, plan C should already be in the drawer.

In parallel to mastering the current challenges, the 44-year-old is already working on the restarting of production. After all, it must then be ensured that the vehicles produced reach the customer as quickly as possible. And in many cases, the customer lives on the other side of the world.

Best prepared for all eventualities

Cordes-Klasing and her colleagues are worried that nobody can predict when production will be restarted in which plant with which quantities for which markets, and when which ports in the world will be allowed to resume operations. “It’s a bit like looking into a crystal ball these days.” This also means: Nobody knows with absolute certainty when, where and how many ships are needed in the world.

“We must be prepared for all eventualities in the best possible way,” says logistics expert Cordes-Klasing. In practice, this means, for example, that charter ships are parked on both sides of the Atlantic, half of them in Europe and half off the coast of Mexico. “That way we can make sure we’re on site quickly once production resumes.”

The Volkswagen Group will then soon also have two charter ships at its disposal for the first time, which will be powered by liquified natural gas, so-called LNG. Compared with conventional liquid fuels such as heavy fuel oil, it burns much more cleanly. Nina Cordes-Klasing herself was on site in China when the two ships were inaugurated in mid-November. Corona was not yet an issue in the world at that time.

Tell a friend:
How Volkswagen is Navigating its Charter Ships Through the Crisis