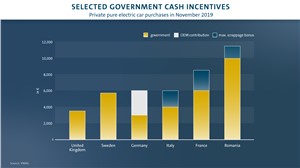 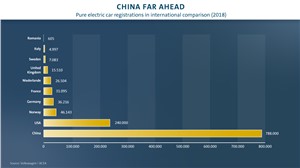 How mobility is best placed to protect the environment: with e-cars AND renewable energy. However, on a global scale there are significant differences between these two megatrends.

At the World Climate Summit in Madrid (2-13 December), representatives from more than 200 countries came together to discuss how international climate protection should work. The last summit 2015 in Paris was a milestone. At that time, the international community agreed to keep global warming well below two degrees compared to the pre-industrial age.

The “how” is still the subject of many heated debates in many countries though, sometimes fiercely contested. The fact is that not a single ton of CO2 has been saved since the Paris Agreement. There can be no talk of a decline or even a slowdown in the global greenhouse gas effect. The noble promises of the heads of state and government have not yet been followed up by effective action.

Nevertheless, in many countries measurable activities are increasingly being taken to protect the climate. This also applies to e-mobility. There are now incentives for switching to e-cars varying from country to country, resulting in a general push towards e-mobility worldwide. These can be financial incentives, tax savings or the reduction of bureaucratic red tape. These approaches vary greatly from market to market.

What is the international status of the energy transformation?

Subsidy programs are aimed at both private customers and drivers of company vehicles. After all, company cars account for the majority of new car sales in most key European markets, so that not only direct subsidies but also different taxation approaches play a role. Increasing the tax burden for vehicles with higher emissions while at the same time granting tax benefits to those with lower emissions is one approach. In other markets, incentives for private buyers to purchase are more appropriate.

Around the globe, electric mobility is growing ever faster. In 2018, the global fleet of electric cars exceeded 5.1 million. That was two million electric cars more than in 2017. No figures are yet available for 2019. But it is already clear: The growth alone compared to the previous year will see the level rise to several million e-cars. Germany is among the leaders. In recent weeks it has overtaken Norway as the country in Europe with the most pure-electric e-car registrations.
The world’s largest market for electric cars remains the People’s Republic of China, followed by Europe and the United States. Norway was the world leader in terms of electric car market penetration in 2018 (46%). At the end of 2018, the global stock of electric two-wheelers was 260 million. There were also 460,000 electric buses.

But the truth is also that the share of electric cars as a percentage of all the vehicles on the roads does not yet provide a credible picture of overall environmental protection. This is because, in addition to a larger share of electric cars, progress is also needed in the energy transformation process. To put it bluntly: if the many millions of e-cars on the road are only really powered by sustainably generated electricity from renewable energy sources will no additional carbon dioxide be emitted. A high share of e-cars in an individual country or in a regional market is the right way to environmentally friendly mobility – but not enough on its own. A change in energy policy must accompany this.

And this is where things still look very different in many countries around the world: China, for example, has a very high proportion of e-cars. However, the energy revolution in this rapidly developing Asian country is still in its infancy. Critics even go as far to say that it is not taking place. A high proportion of coal-fired and gas-fired polluting power stations pollute the air in China. There are regular driving bans in China’s major cities. On many days of the year, smog warnings have to be declared.

Other countries, such as Sweden, France, and Poland, do not rely so much on coal and gas, but continue to rely on – and in some cases increasingly – nuclear power, to supply themselves with their necessary energy requirements. While in France and Sweden, nuclear power plants have been in operation for decades (Sweden has a 40 percent nuclear power mix), Poland is currently building its first one. In 2018 however, its commissioning date was postponed by 14 years to 2040 – but the country is firmly sticking to its plans.  In these countries, as in the US, nuclear power is regarded as clean power because no carbon dioxide is emitted during its production.
Norway and Switzerland, on the other hand, produce a great deal of genuine renewable electricity, including a great deal of hydroelectric power. With a comparatively high proportion of e-cars in these countries, too, this is really beneficial to the environment. Norway and Switzerland have almost achieved their goal: a high proportion of eCars in combination with a large proportion of green electricity. This is the only way to ensure that the vehicles are really environmentally friendly.
Group CEO Herbert Diess recently commented on this topic: “We can achieve our climate targets if we severely limit coal production worldwide and do not expand it further. However, 500 new coal-fired power plants will be built, and 500 new ones are planned. The German government could also exert much more influence on the international stage. Instead, coal mining in Germany still receives tax incentives. That is not consistent.” And on the subject of nuclear power Diess said: “Alternatively, nuclear power plants in Germany could be allowed to remain operational for longer.”

The so-called Energy Transition Index provides an overview of developments (e-car share and progress in the energy transition). It is calculated by the World Economic Forum. It is based on very extensive data, among others: Energy access and security, economic growth and development, environment and sustainability, institutions and government, human capital and customer participation, infrastructure development, innovative business environment, legislation, structure of the energy system.
In this ranking, which is calculated for 115 countries, Sweden ranks first (74.9 out of 100 achievable points), followed by Switzerland (74.3), Norway (73.4), Finland (73.0) and Denmark (72.2). Germany ranks 17th with 64.9 points. At the bottom there are many African and South American countries, such as Mozambique (39.5), Venezuela (38.8), Zimbabwe (38.6), South Africa (36.5) and Haiti (36.0).
Sweden’s crowning position, despite its high share of nuclear power, is surprising but can be explained: The Energy Transition Index calculated by the World Economic Forum evaluates nuclear power as “clean” power – because no carbon dioxide is produced.