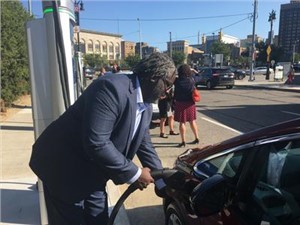 The energy at Detroit's Beacon Park became even more electric today when Project Kinetic, a unique collaboration between the public, private and philanthropic sectors, launched ChargeD in downtown Detroit. The four ChargePoint DC fast charger stations, the first-of-their-kind deployed in the city, enables people to fast-charge their electric vehicles (EVs) while enjoying the park and learning about the benefits of EVs and mobility technologies. The project, led by DTE Energy with support from the City of Detroit, PlanetM, General Motors and Blue Energy, places downtown Detroit on the roadmap for EV technology and infrastructure deployment while continuing to position Michigan at the forefront of future mobility solutions.

DTE Energy and Blue Energy led the installation of the project, and General Motors brought four Chevrolet Bolts to demonstrate the company's commitment to an all-electric future. Two more chargers will be installed at Capitol Park, a public space programmed and managed by the Downtown Detroit Partnership.

As manager and facilitator of the ChargeD project, DTE Energy was responsible for providing the electrical infrastructure and upgrades for the fast chargers.

"DTE's accelerated path toward a clean energy future is well underway. We are excited to join our customers, partners and community stakeholders as we work together to reduce carbon emissions," said Camilo Serna, vice president of Corporate Strategy, DTE Energy. "We are thrilled to lead the partnership effort to bring DC fast charging to the city of Detroit and we look forward to further deployment of EV charger infrastructure, and bringing the benefits of EVs to our customers."

Blue Energy, a Corrigan Company that works with technology partner ChargePoint, is the owner/operator of the chargers. Blue Energy and DTE Energy will collect and analyze data for all four chargers.

"We're excited to expand our footprint in downtown Detroit with such an extraordinary group of companies and to work in collaboration with our partners to implement this project," said Mike Corrigan, president of Blue Energy.

The ChargeD initiative furthers the City of Detroit's downtown accessibility priority of improving traffic conditions and parking offerings for Detroit residents and visitors.

"Project Kinetic helped build a set of pilots for the City of Detroit that were informed by both Detroiters and the private sector. ChargeD will allow residents, employees and users to have access to fast charging technology, create an opportunity to educate the community about electric vehicles and understand what it will take to scale this program across Detroit. It also helps achieve goals concerning clean air, mobility, and the climate crisis, outlined in the recently released Detroit Sustainability Action Agenda," said Joel Howrani Heeres, director, Office of Sustainability, City of Detroit.

General Motors has a long-standing working relationship with the City of Detroit and sees the ChargeD initiative as an important step in providing fast, easy charging while educating the public about the benefits of EV ownership.

"General Motors is committed to an all-electric future with zero emissions and cleaner air for all. The ChargeD initiative is a positive step forward to increasing the education and awareness of EVs and advancing EV infrastructure in Detroit. The new fast chargers in Beacon Park will help make owning a Chevrolet Bolt EV and other EVs more convenient than ever for people across Detroit," said Jordan Catrine, EV Charging & Infrastructure manager, General Motors.

PlanetM, the mobility-focused brand and business development program of the Michigan Economic Development Corporation, also played an instrumental role in the deployment of ChargeD.

ChargePoint worked closely with DTE on the initiative and collaborated with Blue Energy to deploy the right technology for ChargeD. Leveraging the company's fast-charge and software solutions, Blue Energy owns and will operate the ChargePoint Express 250 fast chargers in Downtown Detroit as part of the project.

"ChargePoint is committed to creating solutions that enable the transport of goods and people under electric power and is proud to partner with so many stakeholders to make ChargeD a win for not only Detroit, but electric mobility more broadly," said Rich Quattrini, vice president of Customer Solutions at ChargePoint. "The fast-charge hubs that make up this initiative set an example of how public, private and utility partnerships can be used to drive the electrification of transportation and provide a benchmark for other efforts around the country. This is a significant milestone for EV adoption in Detroit and around the state of Michigan. Public-private partnerships like this are the clearest path forward for communities transitioning to a cleaner transportation future."

NextEnergy and the Downtown Detroit Partnership have also teamed up to develop strategy and planning for educating consumers, businesses and communities about the benefits of EVs via multi-year programming. Support for the ongoing education and programming at Capitol Park is provided by grants from the Michigan Department of Environment, Great Lakes, and Energy (EGLE) and the Michigan Economic Development Corporation/PlanetM.

Formed in January 2018, Project Kinetic is a unique collaboration between the public (City of Detroit, Michigan Economic Development Corporation/PlanetM), private (General Motors, Lear, DTE Energy, Quicken Loans Community Fund, Bedrock Detroit, Boston Consulting Group) and philanthropy sectors with a common goal of identifying and deploying innovative solutions for the toughest mobility challenges facing Detroit. ChargeD is one of five Project Kinetic pilot programs, and the second to launch in the city. The first, Car4You, which provides low-cost vehicle access by the hour in Detroit's Osborne neighborhood, launched in August 2019.