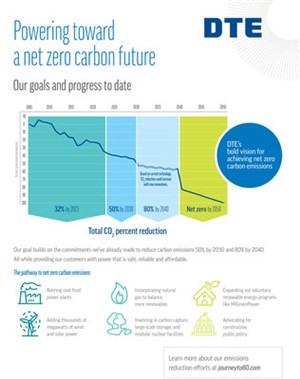 DTE Energy (NYSE: DTE) today announced a goal to achieve net zero carbon emissions in its electric company by 2050. This bold new goal sets the framework for DTE to go beyond its existing commitment to reduce carbon emissions 50% by 2030 and 80% by 2040, ensuring its medium- and long-term plans align with the scientific consensus around the importance of achieving significant economy-wide carbon emissions reduction by mid-century.

"We are fully committed to doing our part to dramatically reduce carbon emissions from DTE Electric," said Jerry Norcia, chief executive officer, DTE Energy. "Setting the goal of net zero carbon emissions for our electric company by 2050 is an important next step that builds on our existing commitments. This is the right thing to do for our customers, business and the environment. We are doing as much as we can, as fast as we can, to provide our customers and the state of Michigan with clean energy that is affordable and reliable. And we invite everyone in the state to join us as we work together to build a cleaner energy future for Michiganders.

"Just as we have played a leadership role in the industry in our carbon emissions commitments, we are committed to playing a leading role and partnering with others to develop technologies that can further reduce emissions," added Norcia. "Additionally, we will work with policy makers to advocate for focused research on carbon offsets, high volume storage and carbon capture technologies."

"As schools, businesses and communities throughout Michigan strive to become more energy efficient, there is a significant opportunity to reduce carbon emissions in a way that provides affordable clean energy, protects our environment and benefits Michigan's economy," said U.S. Senator Gary Peters, a member of the U.S. Senate Committee on Commerce, Science and Transportation. "I welcome DTE's goal to achieve net zero carbon emissions by 2050, and I'll continue focusing on supporting clean energy efforts and technologies in the Senate."

"DTE Energy is pushing the envelope with this ambitious mid-century, net-zero target," said Perciasepe. "The great wisdom of this plan is the technology-inclusive approach combining renewable wind and solar along with a focus on needed R&D in carbon capture, zero-carbon nuclear generation and battery storage capability to reach steeper greenhouse gas emission reductions more quickly."

As Michigan's clean energy leader, DTE Energy is on pace to triple its renewable capacity in the next 10 years and has developed some of the largest wind and solar installations in the Midwest. To date, the company has driven investment of $2.8 billion in Michigan-made renewables and expects to double that in the next five years.

Michigan Senate Energy and Technology Committee Chair Dan Lauwers, and Representative Joe Bellino, chair of the Michigan House Energy Committee issued a joint statement.  "As a major employer in our districts, we have seen DTE fulfill its commitments over the years to provide safe, affordable and reliable power and be a positive local presence in our communities. We applaud DTE's new goal as it sets a "true north" course for Michigan without sacrificing their focus on affordability and reliability."

"The issue of climate control and clean energy are among the most critical concerns that many of us have for not only the next generation but for those living in the current environmental situation," said Rev. Dr. Wendell Anthony, President, Detroit Branch NAACP. "I am pleased to see DTE take the lead in the drive to achieve net zero carbon emissions by 2050. They will play a leading role with industry and government in research and development allowing energy companies to further reduce emissions in some cases even sooner than anticipated. The environment is speaking loudly and clearly to all of us on the issue of climate conditions. I am encouraged that DTE is now speaking back, through technology, wind, solar and renewable energy, declaring that we hear you and now we are increasing our response to you."

"The Clean Air Task Force welcomes DTE's leadership in joining a select group of US companies now totaling nearly 40% of US electricity sales which have committed to net zero carbon emissions by mid-century - the target we need to meet to stabilize Earth's climate. Now the task is to commercialize and deploy the full range of zero carbon technologies that will help us achieve that goal, and CATF looks forward to working with DTE on that effort. The commitment of DTE and its peers to net zero carbon electricity should also be matched by our federal leaders, since it is now clear that the nation's leading energy companies are prepared to meet that goal."
– Armond Cohen, executive director, Clean Air Task Force