Urban Mobility of the Future 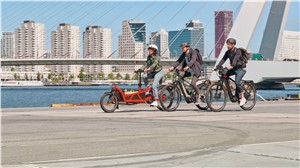 Future mobility is one of the central challenges of our time. The eBike is just one of the few solutions that has already established itself. The pedelec allows individual travel that is both healthy and ecological, and even fun at the same time. It is the pioneer of electro-mobility – and a response to resource scarcity, climate change, urbanisation and rising emissions. It is also a crucial factor in the mobility mix of the future.

Cities are already bursting at the seams today – and will only continue to grow in the future. The United Nations predicts that about two thirds of the world's population will live in cities by 2050. In Germany, already three out of four inhabitants (77 percent) live in cities today; by 2050, this number is expected to increase to 84.3 percent. That is why urban traffic will triple by then. This will further put a strain on infrastructure, which already today is often at its limits. One reason: About 57 percent of all distances are still covered by car, only just over 22 percent are covered on foot and around 11 percent by bike. However, switching to a bicycle or pedelec offers quite the potential: Searching for a parking space is no longer necessary and urban traffic jams can be bypassed or prevented.

More people and more traffic also mean more CO2 emissions, pollution and noise. All of which are factors that also affect the health and quality of life of urban residents. Traffic jams are first and foremost stressful. That puts a strain on your health. Studies have shown that commuters in large cities are at an increased risk of burnout. Especially motorists are at risk. In addition, road traffic is the number one source of noise in cities: In a survey conducted by the Federal Environmental Agency, 76 percent of respondents said that they feel disturbed or bothered by road traffic in their living environment. Commuting by bike, on the other hand, has a positive effect on both mental and physical health.

The pedelec as an urban space solution

Switching to eBikes would reduce the noise level of the road traffic and additionally relieve the burden on the environment. Commuting to work by bike 10 kilometres a day instead of taking the car, saves up to 350 kilograms of CO2 emissions per year. Although the production and disposal of an eBike battery also incur CO2 emissions, these are already compensated by the Pedelec after an average of 165 kilometres, if it replaces travelling by car. It's therefore worth rethinking, especially for commuters: 75.3 percent of commuters in Germany have a commute of less than 25 kilometres, and just under every second German commuter drives less than ten kilometres to work. A distance that is ideal for using eBikes. The pedelec is even the fastest means of transport in the city on routes up to 10 kilometres.

Good news for the environment: The number of cyclists in German cities has almost doubled in recent years. Especially pedelecs are becoming increasingly popular. Nevertheless, the switch is still not attractive for many people. Because urban infrastructure can barely keep up with the increased number of cyclists. "In order to further promote the mobility change in urban areas, the available traffic space needs to be redistributed. Greater importance must be attached to cyclists and eBikers. We need properly developed cycle paths and intersections that allow easy and fluid cycling as well as secure parking racks that protect from theft and vandalism. Only then will the mobility concept of the bicycle be accepted at the level needed to effect a change in traffic. German politicians simply need more courage to rethink the urban traffic space and the willingness to implement it. It is important to tackle measures directly and not always just plan." says Claus Fleischer, CEO of Bosch eBike Systems.

The means of transport is better than its framework conditions. Germany is already much better prepared for the mobility change, especially when it comes to pedelecs. The selection of eBikes nowadays is diverse. Bosch eBike Systems offers drives and components for every type of eBike user and therefore for very different needs. The Active Line is the ideal drive for short distances within city limits, the Active Line Plus is perfect for spontaneous excursions in mountainous areas and the Performance Line always provides a sporty riding experience – no matter whether in city traffic or in the mountains. The Performance Line Speed provides support up to 45 km/h and is therefore optimal for commuters who want to cover many kilometres every day. The Cargo Line, which is also available as a speed variant, is an option for logistics and delivery companies in cities to serve their customers in an environmentally friendly and efficient way using cargo bikes. According to studies, cargo bikes can potentially cover up to 25 percent of urban deliveries and up to 50 percent of service and maintenance trips. Connected displays help to optimise the driving experience in the city. These include, for example, the SmartphoneHub from Bosch, which connects eBikers with the digital world via their smartphones. It assists with navigating the city, allows for fitness tracking, or connecting to third-party services and apps.

Digital and networked solutions in future urban mobility contribute to making city traffic smarter. They make it possible to move flexibly through city traffic – by switching from road to rail mode or even to two wheels as required. "In addition to the appropriate framework conditions and an adequate infrastructure, more people need to change their attitudes and be flexible when it comes to choosing a means of transport or route." explains Fleischer. One thing is clear: The eBike represents an important building block in the modern mobility mix of cities. "The pedelec is a kind of game changer in future mobility – also because it gives the bicycling culture new impetus. Thanks to the electrical support, even more people are discovering the bicycle for themselves. This is a great development and at the same time a prerequisite for sustainably promoting urban mobility."

Tell a friend:
Urban Mobility of the Future