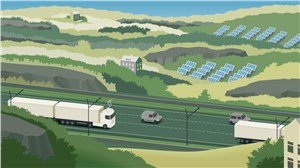 On a busy highway, a truck with trailer is approaching a long section with pylons on the right side. The vehicle’s sensor detects that the traffic lane is now equipped with an electric contact line, and the driver pushes a button to raise a pantograph fitted on the cab’s roof. Within seconds, the cab turns almost completely silent: the combustion engine has stopped, and the electrical motor now powers the vehicle.

Governments and authorities in Germany, Italy and Sweden are actively supporting research projects, with the ultimate aim of building an electrification infrastructure that could cover parts of the highway network in Europe with this green technology.
“Vehicle electrification is developing quickly”

Scania’s view is that it will not be very long until the tipping point is reached where electrification for heavy transport will become a sound investment for transport operators. But as the company continues to invest in and develop electrified solutions, Scania is also pursuing other and more immediate paths to reach sustainable transport.

“Vehicle electrification is developing quickly and with its environmental, social and cost benefits, it will play an important role in the shift to a fossil-free transport system,” he says.

This is how it works:

1. Finding the eHighway
A sensor checks whether the traffic lane is equipped with a contact line. Until now the truck has been powered by the combustion engine. Now, the driver raises the pantograph.

2. Connects to the contact line
When connected, the pantograph transfers the energy directly to the electric motor, simultaneously charging the battery. During braking, electricity is generated as the flow of energy is reversed, charging the on-board battery.

3. Disconnects when overtaking
When the truck is overtaking or is at the end of an electrified section, the pantograph lowers itself. The electrical motor continues to run on battery power for as long as possible. After overtaking the driver can return to the eHighway.