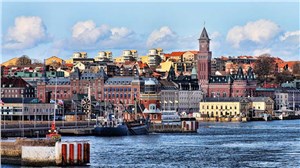 Sweden is currently eyeing plans to generate 100% of its electricity from renewable energy sources by 2045 and, despite the fact the country is often without any sunlight during winter, the country’s energy agency is still considering the role of solar PV in its plans.

The report explores the various technologies that would make up Sweden’s energy mix in a 100% renewable scenario, with hydropower providing around 70TWh of the 160 TWh of power Sweden expects to generate in 2045. In addition to 20TWh of annual net exports, the report also considers the role of onshore and offshore wind power, cogeneration, and solar PV.

“It will happen a lot in the next 20-30 years and we must focus on the overall political goals,” said Martin Johansson, analyst at the Swedish Energy Agency. “

We need to promote renewable electricity and flexibility on a general level, and we must take advantage of the opportunity for synergy. We do not want to get stuck in a specific technology track or suggest new production support, but there can be many solutions to the same challenge.”

The report envisaged several technology-specific scenarios. The contribution of solar could range from as little was 5TWh to as much as 25TWh – depending primarily on the role of wind energy in the country’s energy mix.

Sweden currently boasts around 411MW of solar, as at the end of 2018, after installing 180MW in 2018, the country’s best year in terms of solar energy development.

However, Sweden’s solar capacity is forced to be located in the sunnier southern parts of the country. To increase its solar capacity to more than 20 GW for the 25 TWh solar scenario, it would require the country to install at least a gigawatt of new capacity a year through 2040.

There is currently significant opposition to large-scale solar parks in Sweden, which means that residential & commercial and industrial systems would have to supply the lion’s share of solar PV’s growth over the next two decades.

As part of this, the Energimyndigheten suggested mandating solar be installed on all new buildings – a policy it believes could help account for 30% of its solar ambitions.

Tell a friend:
Sweden Looks to More Solar to Reach 100% Renewables by 2045