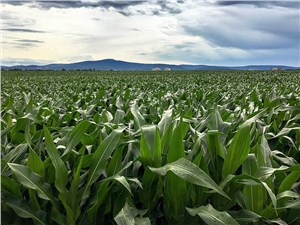 Employing bioenergy has long been considered an important option for climate protection. However, a study by researchers from the Senckenberg Biodiversity and Climate Research Center, the Technical University of Munich (TUM) and Durham University shows, that a largescale expansion in bioenergy crop production could be just as detrimental to biodiversity as climate change itself.

In order to meet the Paris Agreement aims to keep the rise in global temperatures below two degrees Celsius above pre-industrial levels, many climate mitigation scenarios rely on increased bioenergy use, requiring large-scale production of crops such as corn, rape and oil palm.

Limiting climate change benefits nature because it is one of the causes of species extinction. But – if you put the focus on biodiversity – by solely relying on bioenergy to combat climate change you probably replace one evil with another, says a study which involved expertise from the Senckenberg Biodiversity and Climate Research Centre (Frankfurt, Germany) the Durham University (UK) and the Technical University in Munich.

Global impacts on biodiversity
Dr. Christian Hof, who conducted the study at the Senckenberg Biodiversity and Climate Research Centre and is now based at the Technical University in Munich says: “In order to limit climate change in this way, we would need to cultivate bioenergy crops on approximately 4.3 percent of the global land area by 2100 – which corresponds to almost one-and-a-half times the area of all EU countries combined. This would severely affect the biodiversity currently found in these regions. The reduction of the negative effects of climate change achieved by the maximum use of bioenergy is not enough to offset this loss of biodiversity.”

The impacts of an expansion in bioenergy cropland are already becoming apparent. In tropical regions, oil-palm plantations are already having a detrimental impact on flora and fauna. In temperate areas, the replacement of other crops with maize has negatively affected populations of farmland birds and mammals.

Double load
Speaking about the research findings, Professor Stephen Willis, Durham University Department of Biosciences, says: “We found that the combination of climate change and large-scale expansion of bioenergy crops would together threaten the habitats of around 36% of all global vertebrate species, including many that are already the subject of significant conservation work. While bioenergy is clearly an important tool for climate change mitigation, the potential impacts on biodiversity must not be ignored.”

Familiar species that would be predicted to decline substantially across their global range as a consequence of an expansion in bioenergy cropland combined with climate change include hedgehog (44% potential loss), red squirrel (46% potential loss) and red grouse (71% potential loss), say the researchers.

Massive expansion of bioenergy is the wrong way
For Hof and his team, the study only allows one conclusion: “Climate change remains one of the greatest threats to biodiversity and must be limited to 1.5 degrees of temperature increase, if possible. But, as our study shows, bioenergy and the massive expansion of cultivated land is the wrong way to go. Instead, we need to work harder to save energy."