A Treasure Map for the Energy Revolution 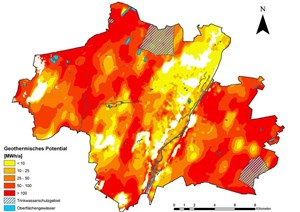 Near-surface geothermal energy could cover a large portion of our energy requirements. Nevertheless, this regenerative energy source is not used optimally. In order to change that, scientists in the EU project GRETA (Geothermal REsources in the Territory of the Alpine space), led by the Technical University of Munich (TUM), have mapped the potential of near-surface geothermal energy in the Alpine region and have formulated guidelines for its use.

An invisible wealth of regenerative energy is concealed beneath the ground we walk on: geothermal energy. Inside the earth temperatures range up to several thousand degrees centigrade. And even if the temperature drops towards the earth's surface, there is still enough warmth to be used efficiently. At depths of up to 400 meters, experts refer to near-surface geothermal energy.

Among other things, groundwater can be used to extract the geothermal heat; it has a temperature of around ten degrees centigrade throughout the year. Heat pumps are used to bring the water to a temperature range of from 35 to 50 degrees. Even if electric energy is added to the process, the net energy yield is still very high.

Effective, but rarely used
Near-surface geothermal energy is perfectly suited for supplying buildings with heat and hot water - or cooling them. "But if we look at the energy action plans and strategies of the Alpine states, it's nowhere to be seen," says Dr. Kai Zoßeder from the Chair of Hydrogeology at TUM.

There are several reasons for this: More than anything, near-surface geothermal energy is simply not present enough in the minds of many people, says the hydrogeologist. "By contrast, deep geothermal energy seems a little more spectacular and is already anchored in many people's heads." And in the past it has been almost impossible to precisely calculate how much energy could be acquired from near-surface geothermal energy at a given location. One difficulty here is the wide range of differing legal regulations which can even vary within a single country. Geology, water conservation areas and natural reserves have to be taken into account as well.

"In our six pilot regions we have captured highly detailed information on the quantitative potential of near-surface geothermal energy," says Zoßeder. The potential surveys generated are available to anyone, as a web application.

Tell a friend:
A Treasure Map for the Energy Revolution