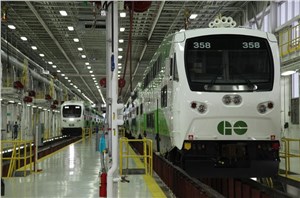 Imagine villages in the Canadian wilderness powered by small nuclear reactors that also provide the fuel for home heating and transportation.

Canadian Nuclear Laboratories, a federally-owned corporation, hopes to prove the viability of small modular reactors by 2026 and use them not only to produce power, but to produce hydrogen that can decarbonize Canada's transportation sector.

"The small modular reactors could be transformational in the way we approach energy generation, and (we could locate) small reactors within communities that are otherwise isolated from large electrical grids. So we really view the small reactors as an enabling element of a clean energy solution," said Gina Strati, CNL's Energy Program director for research and development.

"Our hydrogen research is focused ultimately on cogeneration of hydrogen with the small reactor. But more short term we’re looking at the transport sector. There is a lot of renewed interest in using hydrogen for transport, hydrogen for domestic vehicles, large vehicles, trains."

Strati imagines deploying small reactors across the landscape where they can power remote communities or industrial sites that are far from the established grid. At the same time, they can produce hydrogen that serves as a clean fuel for transport, heating, and other uses that are currently carbon intensive.

Reactors are typically considered small if they generate less than 300 megawatts of power, sometimes as little as 25 MW, compared to conventional reactors which may produce more than 1,000 MW. They are considered modular because they can be constructed in factories, transported to sites and installed underground.

In Canada, the small reactors would be integrated with renewables like solar and wind that, when producing electricity, would allow the reactors to produce hydrogen.

"When I think about integrated nuclear and renewable energy, I really view this as a very holistic problem, where all of these clean-energy technologies, nuclear technologies and renewable, work together synergistically to provide enough power for us to live the way we want to live and use the new technologies that enter the market on a regular basis." Strati said during a July webinar hosted by the Clean Energy Solutions Center.

In April, Canadian Nuclear Laboratories invited companies to propose small modular reactor demonstration projects for its Chalk River Laboratories site in Ontario. In June, it received four proposals. CNL also plans to build a Clean Energy Research Park at the same site, so it can study other clean-energy technologies alongside the small reactors.

A top focus, Strati pledged, will be safety.