This news is classified in: Sustainable Energy Geothermal Energy 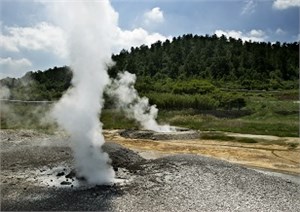 The ambassadors Chile, Peru and Guatemala visited Enel Green Power’s geothermal plant in Larderello (Tuscany). The purpose of the tour was to present technologies and the many benefits that geothermal power brings to local communities, from employment to using steam as sustainable energy for heating homes and powering local companies

The ambassadors to Italy of Chile, Peru and Guatemala visited Enel Green Power’s geothermal operations in Larderello. They were received on February 1 at EGP’s plant in Tuscany, the world capital of the energy from the Earth, where technologies for the industrial use of geothermal power have been developed for more than a century.

The Latin American delegation formed by Luis Fernando Ayala González (Chile), Eda Adriana Rivas Franchini (Peru) and Stephanie Hochstetter Skinner-Klée (Guatemala) had a chance to see EGP’s geothermal expertise firsthand, discovering the history of the oldest plant in the world and the technological innovations due to which the company is still today a benchmark for the entire industry.

The knowhow and excellence of geothermal in Tuscany are becoming increasingly important in Latin American countries, where Enel Green Power is building the continent’s first geothermal plant in Cerro Pabellón (Chile), opening a new frontier for many countries with access to this renewable resource but lacking the technological expertise required to make use of it.

The geothermal tour offered the delegation a chance to visit the power plants and Larderello’s demonstration overhead and to become familiar with the various uses steam is put to in Tuscany. The ambassadors were told the benefits that geothermal power brings to the local economy through the use of steam and geothermal energy by local companies, in particular those operating in greenhouse flower production and agriculture, as well as through cultural and tourism initiatives – including Larderello’s geothermal museum – which have been carried out in Tuscan towns in recent years, attracting a considerable amount of visitors.