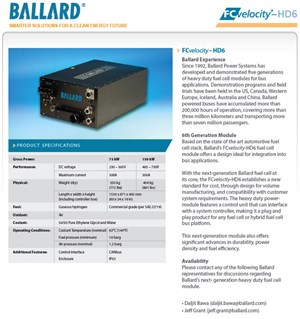 Ballard Power Systems (NASDAQ: BLDP)(TSX: BLD) announced that it has given termination notice on two licensing agreements in the China market as a result of material breaches of these agreements by Azure Hydrogen.

As a result of Azure’s breaches under both contracts, and notwithstanding Ballard’s good faith efforts to reach a settlement, the Company has provided notice of termination of both contracts and will consider its legal remedies.

Azure’s breaches and the resultant contract terminations will negatively impact the Company’s 2014 financial performance. The Company had previously expected to collect approximately $4.5 million of cash from Azure in 2014 Q4 and had previously expected to recognize additional revenue of more than $3 million under the Azure contracts in 2014 Q4. The Company will not book any revenue under these contracts in 2014 Q4 and expects to record an impairment of approximately $4.5 million for the outstanding receivables owed by Azure.

The Company will not achieve its 2014 revenue and Adjusted EBITDA guidance.  The Company will provide further details on its conference call in late February when it will be discussing its 2014 audited financial statements and 2015 outlook.

Randy MacEwen, Ballard President & CEO stated, “While we are clearly disappointed with this outcome with Azure and the negative impact on our 2014 financial results, we remain confident in the long-term attractiveness of the Chinese market for our fuel cell solutions.”