Alexey Likhachev and Peter Szijjarto Discussed the Status of 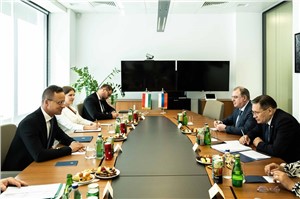 On July 1, 2022, during a working meeting in Istanbul, Alexey Likhachev, head of ROSATOM, and Peter Szijjártó, minister of foreign affairs and trade of Hungary, discussed the current status and further steps in the implementation of the Paks-2 project as well as its transition to the stage of direct construction by September this year.

The parties noted the positive dynamics of the project, in particular the most important licenses for soil stabilization and impervious curtain construction, as well as a license for the production of CMLD (core catcher) were obtained in the last month.

The parties also discussed other issues of cooperation in the field of atomic energy.