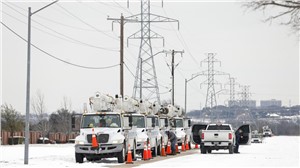 Texas is the only state in the nation that operates its own electrical grid, and because key operations are confined within state lines, ERCOT effectively operates without direct federal oversight (thanks to the Federal Power Act signed by President Franklin D. Roosevelt in 1935). That leaves the Public Utility Commission of Texas to regulate prices in collaboration with ERCOT. Though the arrangement has helped save on energy costs, it also means ERCOT, which manages about 90% of the state's electrical load, can't access necessary capacity from the two other grids in the country in the case of an emergency. Ahead of the storm, ERCOT underestimated how much power it would need to deal with the cold conditions, causing the grid "to rely on fast-responding, expensive replacement generation," Griddy says, and ultimately leaving millions without electricity for days.

Crucial Quote
"When notified, the commissioners agreed that energy prices across the system clearing as low as approximately $1,200 during the first day of the weather crisis was inconsistent with the fundamental design of the ERCOT market," the Public Utility Commission of Texas said Monday. "Because energy prices should reflect scarcity of the supply, the market price for the energy needed to serve load being shed in the face of scarcity should also be at its highest."

Tangent
"Texas friends-TAKE YOUR ELECTRIC BILLS OFF AUTO-PAY," one Twitter user wrote Friday, noting that her bill was already 8 times the normal monthly charge with 25 days still left in the billing cycle. "I sat in the dark and barely used my heat. We need to demand relief for these bills. This is so criminal and evil."

Surprising Fact
At their final meeting before the snowstorm, top officials at ERCOT spent just 40 seconds discussing the approaching cold front and the organization's preparation for it, the Austin Statesman reported.

What To Watch For
Texas lawmakers will hold a joint hearing Thursday to discuss the reliability of the state's grid and the conditions that led to the massive price hikes. State Rep. Donna Howard (D) says the Texas House should address the impact deregulation has had on Texas utilities. ERCOT is set to testify.