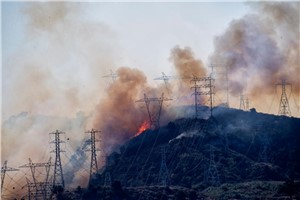 PG&E’s decision to cut power to over two million people last week caused widespread frustration and could cost as much as $2.5 billion in economic losses. Billed as a public safety measure meant to reduce the chance of transmission lines sparking wildfire during periods of dryness and high wind, the power shutoff is undoubtedly more tolerable than the alternative—especially for PG&E, which was driven into bankruptcy after its equipment was found to have caused 2018’s Camp Fire that killed 85 and destroyed nearly 20,000 homes.

Yet, beyond the humanitarian and financial ramifications receiving much of the public’s attention, PG&E’s woes highlight a much bigger problem: infrastructure that’s increasingly unable to support society in an era of climate change and urbanization.

In its last Infrastructure Report Card, the American Society of Civil Engineers handed our energy and electrical systems a D+. Considering the recent power disruptions in California and New York, however, one could be forgiven for giving the U.S. a failing grade. What’s even more disturbing than the state of our electrical infrastructure is the fact that its deficiencies may become increasingly evident as the effects of climate change continue to grow. California, for example, has warmed by 3 degrees Fahrenheit in the last century—triple the global average. The impact of each degree is superlinear, meaning a one degree rise in temperature translates to an exponentially higher risk of forest fires, seeding the potential for power shutoffs several times a year.

One often-cited fix for transmission line-induced wildfires is undergrounding transmission lines to reduce their exposure to the elements. This isn’t a panacea, however. First, it’s expensive. PG&E calculates that it costs $3 million per mile to move power lines underground versus the $800,000 per mile it takes to erect new above ground lines. Some estimates suggest that it would cost PG&E $243 billion to underground all of its lines, or around $15,000 per customer. Second, underground infrastructure isn’t immune to natural disasters. They’re still susceptible to lightning, flooding and earthquakes—and are more expensive and time-consuming to repair.

Another popular alternative is to take an approach similar to San Diego Gas & Electric (SDG&E), which began creating a network of microgrids after the 2007 Witch Fire. These smaller, smarter grids utilize localized power generation, battery-based energy storage, weather stations and automatic switching that can react in real-time to selectively cut off power to a much narrower part of the grid and ensure power resiliency in blackouts and brownouts. As a result, only 52,000 SDG&E customers have lost power due to safety shut-offs since 2013, with some shut-offs impacting only a couple of homes. PG&E’s grid is monolithic by comparison, consisting of a relatively small number of lengthy transmission lines that connect tens of thousands of miles of customer distribution lines. This more centralized approach lacks the complexity, flexibility and distributed architecture necessary to be resilient and responsive. In fairness to PG&E, San Diego is a much smaller market. PG&E has over 4 times the customers of SDG&E across over 17 times the area. Implementing technologies similar to those employed by SDG&E across its entire service area would cost prohibitive for the bankrupt PG&E, which faces over $30 billion in potential liabilities from past fires.

The choice, however, between letting the status quo persist—which is unacceptable—and spending exorbitant amounts of capital—which is unrealistic—is a false dichotomy. Innovation provides a third path by simultaneously solving problems and creating new value.

As L.A. Times columnist Steve Lopez points out about Californians: “We reinvented the world from a garage in Silicon Valley and we have apps that can deliver a poke bowl and a boba to our houses in 10 minutes, but a stiff breeze comes along and we’re back to cooking over coals and lighting the cave with torches?” Were Lopez to explore this observation further, he might find himself wishing that Silicon Valley would spend as much effort improving our electrical infrastructure as it does improving poke delivery times.

Granted, transforming our electrical infrastructure is significantly more difficult than inventing a new food delivery app. It can rarely be done on a laptop or in a garage. It frequently involves an arduous research and development process, and often requires navigating a maze of red tape before a solution can be tested or deployed. It’s not generally considered cool or glamorous, and almost invariably requires an insider’s understanding of complex systems and arcane business models—to say nothing of the array of vertical-specific acronyms esoteric enough to make most medical professionals cringe. So what can be done to unleash the innovative ideas—whether they’re new technologies, new business models or new processes that make existing technologies more affordable—that can save our aging grids?

First, while clean tech has received a lot of attention from venture funds and corporate investors in the last decade, utility tech investment is still in its infancy. Both publicly-owned and investor-owned utilities need to start investing in innovative startups and technologies. Although a growing number of energy majors—from Chevron to BP to Shell to Saudi Aramco to Equinor—now have robust corporate venture arms, the utilities have lagged behind their counterparts in the energy space. In fact, “the utility industry’s first Silicon Valley-based VC & innovation firm,” National Grid Partners was only recently launched in November 2018. Investing in innovation can help utilities operate safer, more efficiently and deliver better service, making it both a social and commercial imperative.

Second, utilities should take customer education, knowledge sharing and crowdsourcing more seriously. Rather than obfuscating information from customers or hiding behind generic statements, PG&E and other utilities should equip customers with more information on how electrical transmission works, why shutoffs are needed and why these issues are complex and hard to fix, creating formal mechanisms that empower people to suggest incremental solutions that could help address these issues in a way that’s realistic and impactful. Sometimes people’s lived experiences make them more qualified to solve the problems they’re facing than the companies who cause them.

Third, a greater number of vertical-specific accelerators, incubators and technology transfer programs are necessary to support utility tech innovation. While startup support platforms abound for software, robotics, IoT, biotech, fintech and food, only a handful focus solely on utilities and even fewer on electrical utilities. These include programs such as Free Electrons, EPIcenter and Illumination Lab. More platforms like these, whether they’re sponsored by governments, corporations or venture firms, are vital to fostering a groundswell of innovation across the industry.

Fourth, many pundits and watchdog groups are quick point out that the utility regime in the U.S. is fraught with inherent problems, particularly its quasi-monopolistic structure. While such accusations are largely true, solutions beyond better government oversight are rarely presented. Yes, more competition in the utility space would improve customer experience, but if we rely solely on government to create the conditions for this competition we are likely to be waiting a long time. Competition can drive innovation, but innovation can also drive competition. The history of capitalism is replete with examples of innovators creating new markets rather than competing in existing ones. In addition to calling on government to step in, we should also be encouraging innovators to step up. These innovators are the ones that have the potential to disrupt markets and transform industries, which is exactly what the electric power and utilities space needs right now.

The spirit of innovation for which California is known is powerful, but that same creativity and brainpower needs to be applied to our physical systems, not just our digital ones. Infrastructure is our society’s most important technology, and we need to spend as much energy rethinking and reinventing it as we have our other devices, none of which would work without our electrical systems. Market disruption can help solve power disruption, but only if our most ambitious innovators—whether they’re entrepreneurs or intrapreneurs, startups or incumbent companies—embrace the unique role innovation can play in improving society while creating new value.