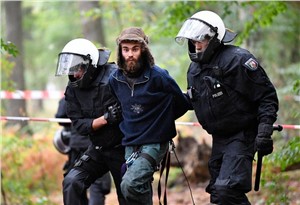 A new report by consulting giant McKinsey finds that Germany's Energiewende, or energy transition to renewables, poses a significant threat to the nation's economy and energy supply.

One of Germany's largest newspapers, Die Welt, summarized the findings of the McKinsey report in a single word: "disastrous."

"Problems are manifesting in all three dimensions of the energy industry triangle: climate protection, the security of supply and economic efficiency," writes McKinsey.

Thanks to a slightly warmer winter, emissions in Germany went down slightly in 2018, but not enough to change the overall trend. "If emissions reductions continue at the same pace as they did over the past decade, then CO2 targets for 2020 will only be reached eight years later, and 2030 targets will not be reached until 2046."

Germany has failed to even come close to reducing its primary energy consumption to levels it hoped. McKinsey says Germany is just 39% toward its goal for primary energy reduction.

Despite much hype, Germany still generates just 35% of its electricity from renewables. And if biomass burning, often dirtier than coal, is excluded, wind, water and solar electricity in Germany accounted for just 27% of electricity generation in 2018.

But McKinsey issues its strongest warning when it comes to Germany's increasingly insecure energy supply due to its heavy reliance on intermittent solar and wind. For three days in June 2019, the electricity grid came close to black-outs.

"Only short-term imports from neighboring countries were able to stabilize the grid," the consultancy notes.

"It can be assumed that security of supply will continue to worsen in the future," says McKinsey.

Renewables are causing similarly high price shocks in other parts of the world including Texas, Australia, and California.

And Britain and Australia have faced similar energy supply problems in recent years as they have attempted to transition to intermittent renewables.

“Wind generation, solar and interconnectors are different to the conventional electricity generation sources,” Britain's National Grid said in a report after lightning knocked a wind farm and natural gas plant off the grid in August, causing a black-out in London.

Bloomberg News, which strongly advocates renewable energy, last week called the supply problems a "warning short to the rest of the world."

“We have to have systems in place to make sure we still have enough generation on the grid -- or else, in the best case, we have a blackout, and in the worst case, we have some kind of grid collapse,” Severin Borenstein, a University of California energy economist told Bloomberg.

German utilities too are warning of insecure supply. “By 2023 at the latest, we will be running with eyes wide open into a shortfall in secure capacity,” a managing director for the Germany energy industry association BDEW said.

"The ongoing phase-out of nuclear power by the end of 2022 and the planned coal withdrawal will successively shut down further secured capacity," explained McKinsey. "In particular, the industrial regions in western and southern Germany are affected, in which many capacities go off the grid and at the same time, one can not expect high rates of development of renewables."

In June, Germany imported more electricity than it exported, and by 2023, Germany will become a net electricity importer, McKinsey predicted.

The growing insecurity of German energy supply is made worse by the fact that its neighbors Belgium and Netherlands may shut down baseload capacity: coal plants in the Netherlands and nuclear plants in Belgium.

As such, McKinsey worries that Germany may not be able to meet demand with imports. "In the medium term, there is a risk that there will not be enough supply capacity in the entire European network."

That could happen as soon as five years from now. "Without adequate expansion, the first bottlenecks could occur as early as the middle of the next decade, and they will continue to worsen until 2030."

If Germany continues to phase out both coal and nuclear, Germany will lose "the equivalent of 43% of total secured output in 2018."

To stabilize the electricity grid and avoid becoming too dependent on imported natural gas, Germany is expanding coal mining to the Hambach forest, where environmental activists were arrested last September.

Meanwhile, local communities and environmentalist have successfully blocked the building of transmission lines from the windy north to the industrial south.

Electricity prices will continue to rise through 2030, McKinsey predicts, despite promises in recent years by renewable energy advocates and German politicians that they would go down.

And higher prices will threaten the German industry's competitiveness. "Even a modest increase of a few euros per megawatt-hour," McKinsey says, "could jeopardize the competitiveness of energy-intensive industries in Germany."

Radical change is required, McKinsey says. "Small changes in direction are no longer sufficient to lead the energy transition back on track. What is required is a fundamental turn in energy policy."

Among the radical changes required include building transmission lines eight times faster than they are currently being built, building new back-up power plants, and installing instruments to control electricity demand, all of which would drive electricity prices even higher.

"But it is also clear that the consequences of a blackout would be much higher," warns McKinsey.

Alternatively, Germany could abandon its phase-out of nuclear energy, something the consultancy, like many others in the country, does not mention.