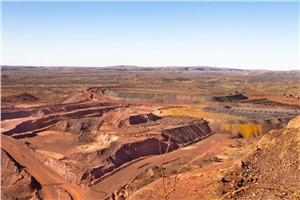 Not every country is yet to be buffeted by the China vs. U.S. standoff with Australia just posting its best ever monthly trade performance thanks largely to China's demand for natural resources to feed its manufacturing sector.

Whether the good news can continue if the trade war and currency conflict worsen is a question worrying many economists, but for now, they're celebrating a $5.5 billion surplus on Australia's trade account for the month of June which, with an equally unexpected surplus in May $4.2 billion, means the country is heading for its first current account surplus since 1975.

The trade account is a simple measure of exports versus imports, whereas the current accounts takes in all other costs, items sometimes called invisibles, such as financing and insurance.

What happened in June is that the value of exports, particularly iron ore, which is riding high thanks to a shortfall in Brazilian supplies, rose by 1.4% to $29 billion, while imports fell by 3.6%, a decline which reflects sluggish domestic demand in the Australian economy.

The chief economist at Westpac Bank, Bill Evans, said the latest monthly trade result opened up the possibility of a current account surplus for the June quarter.

"If so, that would be the first current account surplus since the June quarter of 1975," Evans said.

Concern It Might Not Last
Other economists are warning that the good trade news might not continue, especially if the Chinese economy slows, taking with it demand for Australia's raw material exports.

Westpac said in its analysis of the June trade result that it was not only a record monthly high, but the $5.5 billion surplus easily exceeded its forecast of $4.1 billion, and represented a continuation of a strong trade result in May.

Much of what's happening with Australian exports is a result of a project development boom earlier this century which saw a number of new liquefied natural gas projects and iron ore mines developed, creating boom-like conditions in the local economy.

After the building boom came a slowdown which saw economic growth falter though the economy has not experienced a recession in 24 years.

What's happening now is that the additional production capacity from the building boom is reaching export markets with the rising revenue helping offset the effect of slowing domestic demand.

Interestingly, the improving trade position is not being reflected in the Australian currency which has been falling all year, largely because of the close connection between Australian exports and Chinese demand which could prove to be fragile in a full-blown trade war.

Since early last year, the Australian dollar exchange rate has fallen by 13.3% from 78.3 cents to the latest rate of 67.8c.