Canada Is Warming 3 Times Faster Than The US 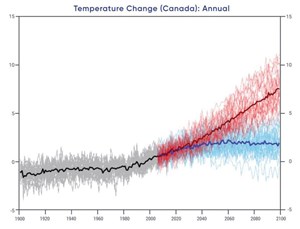 Canada is warming, on average, three times faster than the United States, leading to more winter precipitation and heat waves.

The recently published study was conducted by Environment and Climate Change Canada and outlined how Canada's climate has changed since 1948. The report found that it is "virtually certain" that Canada's climate has warmed in the past century and a half. Of this warming, likely more than half is due to human activities.

This has led to a 1.7°C increase in mean annual temperature across the country, with more pronounced warming in northern Canada of 2.3°C.

To put this into perspective, the United States has warmed approximately 0.56°C and 0.8°C warming globally, according to NASA. The figure below by NASA tracks how global temperatures have changed since pre-industrial times.

In line with what scientists have measured around the world, higher latitudes are warming significantly faster than lower latitudes. This could be, in part, due to the observed slow down of global ocean circulation that brings warm tropical waters to places like northern Europe.

By the end of the century, scientists predict that Canada will lose between 74% and 96% of its glaciers, leading to increased coastal flooding and loss of habitat for species that rely on glaciers.

The figure above provides a historical look at average temperature across Canada with a projected temperature increase of 1.8°C to 6.3°C for the low and high emissions scenarios.

The story for Canada is not unlike the rest of the world, which continues to face increased warming. However, high latitude countries like Canada also grapple with a higher magnitude of warming, loss of glaciers and melting of permafrost.

One positive for northern countries is that Canada will experience a longer and warmer growing season. In addition, ice in all forms (sea ice, glaciers, permafrost, snowfall) will decrease each decade going forward changing the landscape, accessibility, and ecosystem across northern Canada.

Tell a friend:
Canada Is Warming 3 Times Faster Than The US