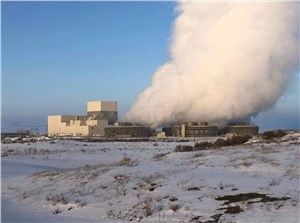 For the last month, the Pacific Northwest’s only nuclear power plant has been under a “No Touch” order to help keep the heat on as record cold and snow covered the region. I was stuck in my house for eight days.

As reported by Annette Cary of the Tri-City Herald, the Bonneville Power Administration, which markets the electricity produced at the nuclear plant near Richland, asked Energy Northwest, the operator of the power plant, not to do anything that would prevent the plant from producing 100% power at all times during an unusually cold February across the state that increased the demand for electricity – no maintenance activities, even on its turbine generator and in the transformer yard. Don’t do anything that would stop the reliable and constant power output of nuclear.

“No Touch” is requested by BPA when unusually hot or cold weather increases the demand for electricity, notes Mike Paoli, spokesman for Energy Northwest. Many regional transmission and system operators across the United States ask nuclear plants to keep running during extreme weather because nuclear plants are the least affected by bad weather.

In August 2017, the nuclear power plant was under the policy when temperatures exceeded 100°F for an extended period at the same time that smoke from wildfires also fouled the air. Similarly, in 2014, nuclear played a large role in dealing with the first Polar Vortex to get national attention. During that Vortex, PJM Interconnection, the largest U.S. grid operator, warned that we risk having deadly blackouts without a diverse energy mix that includes nuclear.

Having sufficient nuclear power is key to our future handling of climate change effects as extreme weather gets more extreme, something echoed by all leading climate scientists.

The electrical grid is not immune to the effects of massive cold snaps (IEEE). All generation systems suffered outages during extreme weather effects but most of them involved fossil fuel systems. Coal stacks are frozen or diesel generators simply can’t function in such low temperatures. Gas chokes up - its pipelines can’t keep up with demand - and prices skyrocket.

The first problem with widespread cold or heat is a spike in electricity and gas demand since everyone is re-adjusting their thermostats and it takes a lot more energy to keep us at comfortable temperatures.

Interestingly, nuclear prices do not go up - the reactors just keep running. They don’t have to worry about fuel supply - they have enough on hand for years - and they don’t have to do anything special to deal with the extreme weather.

Columbia Generating Station has the capability to produce 1,207 MW, which is enough energy to power Seattle. And it is usually putting out all of this power at all times. Energy Northwest already has a diverse mix of non-fossil fuel generating systems that, in aggregate, produce over 10 billion kWhs of electricity each year while emitting less than 20 gCO2/kWh.

It is noteworthy that this nuclear plant’s output has steadily risen over the last several years while the cost has steadily decreased, from 6.3¢/kWh in FY2010 to 4.2¢/kWh in FY2019. It new long-term contracts prevent it from going above 5¢/kWh. Most gas plants can increase their ten-fold during bad weather.

The nuclear plant helps protect BPA from having to go out on the open market to buy power, said David Wilson, a BPA spokesman. “We asked them for the “No Touch order,” because of low stream flows, high natural gas prices and the very cold weather.”

Hydro supplies most of the energy in Washington State, but cold snaps come as water flows that spin the hydroelectric dam turbines are low and wind generation is low as well. The hottest and coldest months are usually the least windy.

Energy Northwest’s nearby Nine Canyon Wind Farm only turned out 20% of its potential energy supply during February, Paoli said.

Natural gas plants are constrained by pipeline capacity as natural gas is needed to heat homes in cold weather rather than produce electricity, and natural gas prices are very sensitive to demand, according to BPA.

The No Touch order at the Columbia Generating Station is expected to be lifted soon, although continued cold weather could require it to keep producing max power.

A diverse energy mix is really, really important. Whether it's massive liquid-gel batteries that would maximize renewable capacity, small modular nuclear reactors, keeping and uprating existing nuclear, better pipeline technology and monitoring - in the coming decades, whatever we can do, we should do.

But nuclear is clearly the winner when it comes to extremely bad weather.