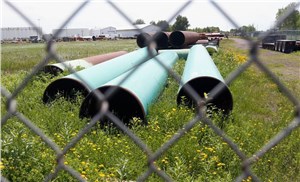 With Friday's headline, "Trump Eyes Action to Limit States' Powers to Block Pipelines," an oil and gas blog is due.

Despite a 140% boom in U.S. crude oil production and a 50% jump in natural gas output since shale took flight in 2008, the midstream infrastructure to pipe this new supply around the country has simply not kept up. This is a major problem for us because pipelines are easily the safest and most economical way to transport energy.

In addition, hardly “going away,” oil and gas will still supply the bulk of U.S. energy through at least 2050, according to just released modeling from the U.S. Department of Energy in the Annual Energy Outlook 2019.

The Permian basin in West Texas, giving a third of all U.S. crude production, confronts a pipeline bottleneck from a surge of activity. Yet, most of this will be rectified as the build-out in our largest oilfield continues to catch up. After all, although stronger than you might think, the pipeline pushback in oily Texas from “environmental groups” is not as potent as in other states.

In contrast,  New York and the six New England states are really ground zero for our pipeline problem where “environmentalists” – despite significantly relying on oil and gas themselves in their daily lives – remain steadfast against new builds.

Indeed, gas is increasingly being utilized in these anti-pipeline regions for generating both electricity and heat. In New England, for instance, gas has accounted for over half of all electricity: "New England's Known Need For More Natural Gas Pipelines."

It is no wonder then that these anti-pipeline areas have 1) the highest energy and electricity prices, 2) fleeing high paying manufacturing jobs, and 3) great concerns over electric reliability in periods of high demand: "What Happens When You Don't Build Natural Gas Pipelines?"

New York though might pose the biggest threat. Not just anti-pipeline, Governor Cuomo will not consider developing the state’s portion of the giant Marcellus shale gas play that has so benefitted Pennsylvania, Ohio, and West Virginia.

The contradiction from The Empire State is again palpable: despite producing no gas itself, New York relies on gas for a leading 40% of its electricity. "Why New York's Fracking Ban For Natural Gas Is Unsustainable."

That is correct, unthinkable a decade ago, the U.S. has a rapidly expanding export complex for both oil and gas. More pipelines will help us reach our coastal facilities to supply and make friends around the world while buffering the influence of riskier adversaries.

Make no mistake: OPEC and Russia are primed to pounce on a global market that continues to devour oil and is embracing cleaner natural gas as a destination fuel and globalizing commodity similar to oil itself.

On average, annual global oil demand grows ~1.5 million b/d and gas use by ~6 Bcf/d. If pipeline constraints block the U.S. from meeting those rising needs, the geopolitical consequences for us could be dire.

In fact, despite being sanctioned by the U.S. government, Russia has already taken advantage of New England's anti-pipeline stance. Russia has happily supplied Everett LNG import terminal in Boston with shipped gas this winter and last. This demonstrates just how much the anti-pipeline business in New England might be our most obvious "colluding with Russia" problem: nearby Pennsylvania, Ohio, and West Virginia now produce a staggering 32 Bcf/d, or enough to satisfy New England 7 or 8 times over even when demand peaks!

Indeed, geopolitically, more pipelines are essential because they will help us link better with allies Mexico and Canada, oil and gas giants in their own right. A stronger, more connected North American energy bloc to counter less predictable global energy alliances is mandatory.

And pipeline constraints help explain why we still import a ton of oil and gas, with too many areas not having access to our own domestic production surge. For example, we still imported an overly high average of 7.9 million b/d of crude oil in 2018, despite recently reaching a mind-blowing record of 12 million b/d of crude production. This worsens our trade deficit, hampers our goal for energy self-sufficiency, disrupts local communities thriving on shale development, and dangerously benefits riskier international suppliers.

For oil in particular, more pipelines give us an expanding ability to lower prices not just here but around the world, a critical component to growing the global economy that we must help to realize. As just stated in Davos by Patrick Pouyanne, CEO of the oil and gas giant Total:

This already proven domestic ability to lower crude oil prices here and abroad is something that the anti-oil crowd had long claimed was impossible, asserting that since oil is a global commodity, more U.S. production simply cannot make that much of a difference.

The American shale revolution has proven this claim to be utterly false.

To conclude, I implore the South, Midwest, West, and even Appalachia itself to not follow the anti-pipeline way of New York and New England