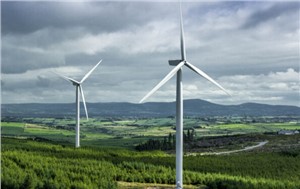 The Nordex Group has installed its “Xtended Power” Upgrade to 52 wind turbines with a total capacity of 135.5 MW across two wind farms in Ireland. This upgrade increases annual energy production for its client Greencoat Renewable PLC (“GRP”) by up to 0.8 percent, despite severe grid-related production constraints.

At the wind farms Glencarbry and Knockacummer in the Republic of Ireland, GRP operates N90/2500 Gamma series turbines, as well as N100/3300 Delta machines which were built between 2014 and 2017. Within the framework of GRP’s “Performance Enhancement Strategy”, the client decided to equip the turbines with Nordex’ ”Xtended Power” Upgrade.

Following Nordex’ detailed analysis of the potential for the specific optimization of each project in summer 2021, the nominal power of all the wind turbines was increased just a few months later, thanks to this upgrade. The turbines will now be able to produce additional clean electricity.

Greencoat has been actively focused on their global performance optimization plan over the past months and this has generated significant increases in their base case model. These optimizations have been categorized in different buckets as PPA, Revenues, Opex and, in this instance, “Generation”, leading to a turbine upgrade on several Nordex wind turbines across the portfolio. Greencoat is very pleased with this successful collaboration with the Nordex Group.

Since 2019, the Group has offered its clients with Delta generation turbines “Xtended Power Delta” as an optional package. To date, more than 180 wind turbines have been uprated across Europe. Since the end of last year, the company has also offered “Xtended Power Gamma” for N90/2500 previous-generation Gamma machines. Thanks to the higher nominal power provided by the “Xtended Power” upgrade, annual energy production can be increased by up to 3 percent.

The Nordex Group takes advantage of its experience as a manufacturer of high-efficiency turbines to apply state-of-the-art developments from its current series production to the continuous performance improvement of the older generation turbines in its fleet. Through its “Upgrade” and “Xtended Power” products, the Nordex Group offers wind farm operators the opportunity to upgrade their turbines to latest-generation performance levels quickly and in a profitable way, through products adapted to their needs. In combination with “Xtended Lifetime”, reliable operations of wind turbines can be achieved beyond their initially-planned working life.