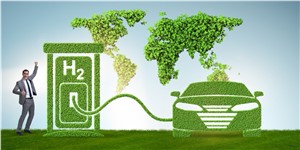 The wind powered green hydrogen accounts for the largest market share in the global green hydrogen market during the forecasted period in terms of value and volume
Electrolyzers based on wind energy contribute to nearly 52.7% of all green hydrogen by value in 2020. Wind plants are normally set up onshore or offshore. Offshore plants have standard output year long as compared to onshore plants. The price of wind energy has declined by 44-78% from its peak in 2007-2010. This factor has given a major boost to the acceptance of wind power for green hydrogen production. Currently, both offshore and onshore wind farms are utilized for power generation for utilization in green hydrogen generation

The mobility end-use industry accounted for the largest market share in the global green hydrogen market during the forecast period in terms of value and volume.
The mobility end-use industry accounted for the largest share by value of the green hydrogen market. This is because hydrogen offers three times more energy per unit than fossil fuels. Before the commercialization of fuel-cell-based engines, the mobility industry had no other sustainable alternatives to fossil fuels. But fuel cell EVs (FCEVs) offer a sustainable alternative. Green hydrogen is a viable and practical substitute for the automotive industry. Green hydrogen-based vehicles are optimal for mining vehicles, trains, aircraft, lorries, buses, and even maritime. Shipping companies are accepting green ammonia with open arms as their way to cut down carbon emissions. Green ammonia, unlike green hydrogen can be stored in normal tanks and can be used in both internal combustion engines and fuel cells.

Europe is expected to account for the largest share in the green hydrogen market during the forecast period.
Europe is the largest market for green hydrogen globally. Currently, less than 2% of Europe’s energy consumption comes from hydrogen. The European Green Deal aims at reducing greenhouse gas emissions and preparing Europe’s industry for a climate-neutral economy. In July 2020, the European Commission published the EU hydrogen strategy. It was designed with a phased approach, and its goal is to increase hydrogen shares from less than 2% up to 13%-14% by 2050. The priority is to develop clean, renewable hydrogen with cumulative investments between Euro 180 and Euro 470 billion in Europe by 2050. A green hydrogen economy will also create 1 million new jobs for highly qualified personnel in Europe by 2030 and up to 5.4 million by 2050. The European Clean Hydrogen Alliance was also announced as part of the new industrial strategy for Europe in March 2020 and launched on 8 July 2020, at the same time as the EU hydrogen strategy. Major automotive manufacturers in the European region, such as Porsche, Ducati, BMW, and Audi, are focusing on the downsizing concept of car engines and manufacturing lightweight and fuel-efficient engines, which will also drive up the growth of the green hydrogen market.

Linde (Ireland), Guangdong Synergy Hydrogen Power Technology (China), Siemens (Germany), H&R Olwerke Schindler (Germany), Cummins and Enbridge Gas (Canada), Wind to Gas Energy GmbH & Co. KG (Germany), Toshiba (Japan), and Nel (Norway) are the leading players in the market. There is significant competition in the green hydrogen market to lower the manufacturing cost, develop new process technology, expand, and increase the use of green hydrogen in the end-use industries. Owing to such opportunities in the industry, companies are aiming to increase their market shares by adopting various strategies.