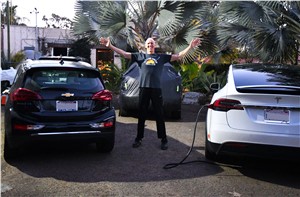 Stellar Solar, one of San Diego's most experienced solar and battery storage installers since 1998, has won the San Diego Union Tribune Readers Poll in the category of Best Solar Company again in 2021, making it a record five consecutive years winning the award.  Their victory in 2021 adds to wins in 2011, 2013, 2014, 2015, 2017, 2018, 2019 and 2020. The winning streak sets a record in the category of Best Solar Panel Company and is a direct reflection on the satisfaction of their 14,000 + residential and commercial customers. The win further solidifies Stellar Solar as a preferred choice for home and business owners who are looking to install solar, battery storage, and EV connectivity.

Kent Harle, co-founder and CEO of Stellar Solar had this to say about winning the award for the fifth year in a row in a crowded field that included local and national solar companies nominated in the poll:  "I'm always elated to get this news, especially given the challenging work environment we faced as a result of the pandemic. I was also inspired recently at the San Diego Union Tribune Readers Poll Best Awards when former NBA All Star, broadcaster, San Diego resident and Stellar Solar Evangelist Bill Walton spoke on the deck of the USS Midway Museum and quoted his legendary coach John Wooden. The quote mentioned taking talent to get to the top, and character to stay there. I believe that the Stellar team has character, and our employees make good choices and do the right thing. Our energy consultants are also known for their educational approach to sales in lieu of high pressure tactics, all of which contributes to us consistently being voted San Diego's Best Solar Company. Over the last year we also established ourselves as the go-to resource for battery storage and electric vehicle connectivity, which is reflected in our new tagline, Electrify Your Life."